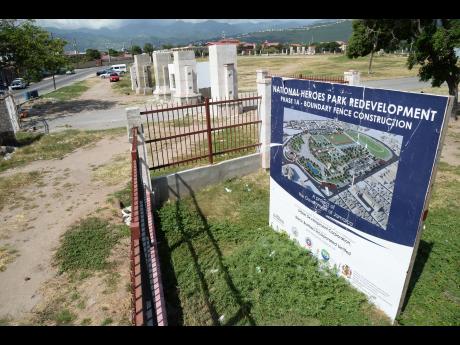 Jermaine Barnaby
National Heroes Park fencing yet to be completed.

The Urban Development Corporation (UDC) has terminated the contract it had with Kenneth 'Skeng Don' Black-owned Black Brothers to construct a perimeter fence around National Heroes Park in central Kingston because of non-performance.

The $152-million project, which started in 2015, is reportedly only 70 per cent complete, despite the deadline for completion being twice shifted.

Further, the Government has forked out approximately $123 million for the work done so far.

Minister without portfolio in the Ministry of Economic Growth and Job Creation, Horace Chang, told The Gleaner yesterday the termination would come after several delays and concerns with the progress of the work being done.

"There has been serious concerns about the rate of progress on the contract. The termination is not a Cabinet decision, it is an agency decision based on the performance [of the contractor]," Chang stated.

Speaking at a political meeting in 2015, Daryl Vaz had blasted the People's National Party (PNP) for deciding to spend $152 million on the perimeter fence.

Then, Vaz had urged the PNP to cancel the contract because it had been given to a company owned by Black, a PNP activist.

"I am telling and warning the PNP, cancel the contract and give it to the health sector, because if the Labour Party come in - which they are going to - not a brick can lay and no fence can't lay deh so," Vaz said.