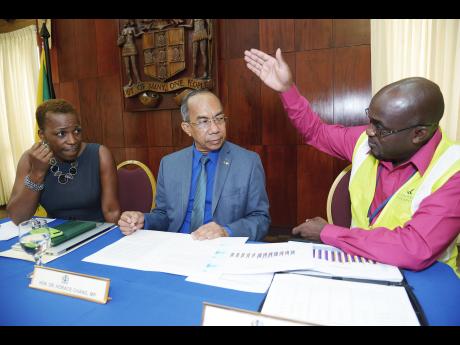 Ian Allen
Norman Wiliams (right), operations manager, Kingston Freeport, explains the recent happenings on the wharf to Dr Horace Chang (centre), minister without portfolio in the Ministry of Economic Growth and Job Creation, and Elva Williams-Richards, senior vice president for finance at the Port Authority of Jamaica, during a press conference at Jamaica House yesterday.

Amid growing unrest at the Kingston Freeport Terminal, the Government has stepped in to ease the frustration of truckers who had become irate over the pace of work at the terminal.

At a press conference yesterday morning at Jamaica House in Kingston, minister without portfolio in the Ministry of Economic Growth and Job Creation, Horace Chang, said that the Government, through its agencies, and the truckers have to come to an agreement on the way forward.

Among the items listed under the agreement, a copy of which was obtained by The Gleaner, is that there will be a minimum of six straddle carriers available at normal hours with an increase to eight during peak hours.

The parties also agreed that they would convene more frequent meetings and work towards achieving a 45-minute turnaround time during peak periods.

Change said that the delays were caused by the introduction of the NAVIS system at the terminal. He also told the media briefing that the issues at the Kingston Freeport Terminal were as a result of a breakdown in communication among the stakeholders.

The minister, however, promised that there would be improved communication going forward, even as he admitted that the full implantation of the system would take some time to be completed.

Truckers went on strike last Tuesday after they complained about the slow pace of doing business at the terminal.

'We need our money back!'

Putting pressure on the Government is the powerful Jamaica Manufacturers' Association (JMA), which, last Friday, said that the backlog at the Kingston Freeport Terminal had severely affected the manufacturing and exporting sectors.

Since then, Richard Pandohie, deputy president of the JMA, has disclosed that those losses and charges were being tabulated.

He said the intention was to recoup the costs from the Kingston Freeport Terminal Limited, which operates the port.

"We need to see the exact impact, because we don't want an emotional or anecdotal conversa-tion. We want to bring the numbers to the table and say, 'This is the cost to our business ... private companies have cost, [and] listen, we need our money back!'"

He had proposed that Kingston Wharves be engaged by the Kingston Freeport Terminal Limited for the clearing of domestic containers by manufacturers.