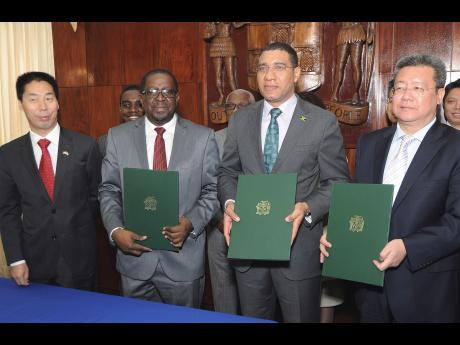 File
Prime Minister Andrew Holness (third left) along with Niu Quinbao (left), Chinese ambassador to Jamaica; Ransford Braham (second left), chairman of the Urban Development Corporation, and Xuexaun Zheng, vice-president of China State Construction Engineering Corporation, just after the signing of a memorandum of understanding for the building of a new Parliament building.

The Urban Development Corporation (UDC) says that the new Parliament building will be definitely designed and built by Jamaicans, a position, it argues, that was always held, but which was lost in the 'noise' of public controversy over whether there would be foreign help.

"The UDC, in its responsibility as project manager, continues to execute the mandate and the terms of the memorandum of understanding (MOU) to ensure that the Parliament and the museum are built by Jamaicans," said Dr Damian Graham, the agency's general manager, on Tuesday.

Local interest groups, including architects and engineers, had accused the Government of outsourcing work on a national symbol when the administration signed the non-binding MOU with China Construction America (South America division), which is a subsidiary of China State Construction Engineering Corporation Limited. The MOU was signed for the Government Circle Project at Heroes Circle in Kingston. The new Parliament building is to be located there.

Speaking in a Gleaner interview, Graham said at the MOU's signing on March 9 that it was "expressly" stated that work would be done by the UDC, which "comprises 100 per cent Jamaicans".

At subsequent meetings with concerned interest groups, "We went on record to categorically state that the master-planning work that's being done is being carried out with augmented capacity that is not having to do with the design and building aspect of the project.

"[But] we maintained that building, and the designing of the Parliament and the museum that is related, would have been done by Jamaicans. I suppose it was not heard amid all of the noise that was being carried on."

The Jamaica Institute of Architects (JIA) and the Jamaica Institution of Engineers have been among the more vocal groups questioning the move by the Government to accept the unsolicited offer by the Chinese company and then sign the MOU. That agreement, according to the JIA's Clifton Yap, guarantees maximum payment of US$1 million and exclusivity for the period it is in force.

As outrage mounted, the Office of the Prime Minister (OPM) released a statement on March 17 quoting the prime minister saying, "purposeful efforts will be made to include Jamaicans in the design and execution of the project", which was "always the intention of the Government".

"While we are at the extreme early stage of this project, our aim and focus are for Jamaicans to build a complex that we all can be proud of," it added.

Robert Morgan, director of communications in the OPM, who participated in Tuesday's interview, said, "What has happened now is that the noise has died down a bit and people are able to listen clearly."

The Urban Development Corporation is now in Phase One of the project, which, it said, includes the Chinese company using 12 months to provide a concept development.

Regarding the Parliament building, which is only one aspect of the Government Circle project, Dr Damian Graham said that the agency was likely to advertise for bids "within the next month".

The current Parliament building on Duke Street in Kingston has been criticised for lack of space, not being accessible to the disabled community, and possessing safety and security risks.