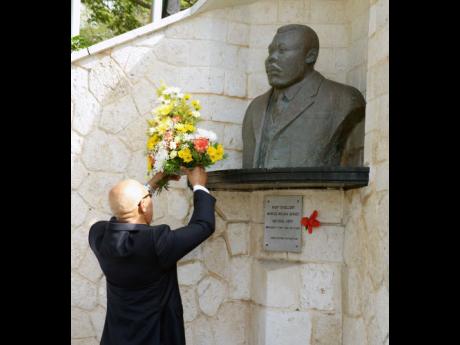 Ian Allen
Governor General Sir Patrick Allen places a wreath at the cenotaph of Marcus Mosiah Garvey during the floral tribute commemorating the 130th anniversary of the birth of the national hero. The floral tribute was held at the National Heroes Park in Kingston yesterday. 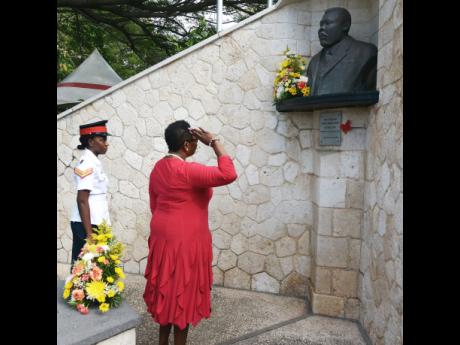 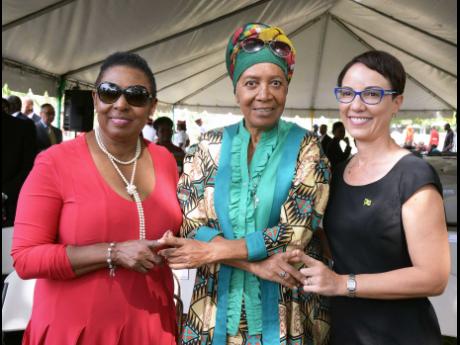 Ian Allen
From left: Olivia Grange, minister of entertainment, sport, culture and gender affairs; the multifaceted Barbara Blake-Hanna; and Kamina Johnson-Smith, minister of foreign affairs and foreign trade, pose for the camera during the floral tribute commemorating the 130th anniversary of the birth of Marcus Mosiah Garvey. 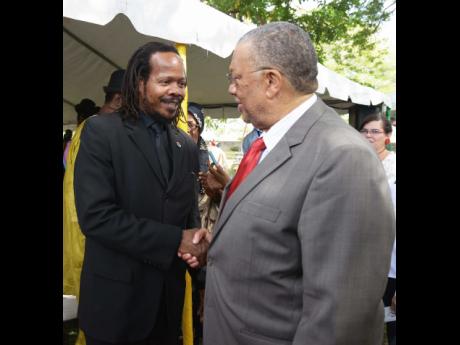 It is now 130 years since the birth of Marcus Garvey, and to this day, the national hero is still being hailed and remembered as one of the bravest men of his time.

"A revolutionary," is how Minister of Entertainment, Sport, Culture and Gender Affairs Olivia 'Babsy' Grange described Garvey during her address at a floral tribute at the National Heroes Park yesterday, as she spoke of his well-documented contribution to the development of Black consciousness.

"His weapon was education and his mantra was Black pride. He taught us that the way to achieve Black power and Black prosperity was through education, not bullets," Grange said of the pan-Africanist.

Said to be one of the most influential pan-Africanists, Garvey was born in Jamaica in 1887 and rose to prominence through his insistence that the people from Africa had rights that were to be observed and respected.

He founded and developed the Universal Negro Improvement Association (UNIA) into a major international organisation that had, at least, five million members in more than 50 countries in the 1920s.

Head of the UNIA Stephen Golding yesterday called for Garvey's life and legacy to be celebrated, but urged that his sacrifice be not taken for granted.

"We should not only celebrate, we should be conscious of the sacrifice that Garvey made in order to educate and enlighten us with respect to our plight as descendants of Africans living in the West," Golding urged.

Stephen Golding, head of the Universal Negro Improvement Association (UNIA), believes that Garvey's teaching is particularly relevant today, given recent events in the United States, where White nationalist have sought to ordain themselves as superior to other races, sparking outrage across states.

Garvey declared the "unity of the 400 million Negroes of the world", and the UNIA received effective observer status in 1922 at the League of Nations and also held international conventions from 1920.