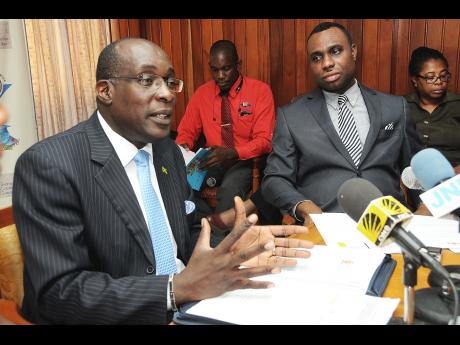 That was the sentiment from Ronald Thwaites, opposition spokesman on education, as he joined Education Minister Ruel Reid in lauding the 2.5 percentage point increase in the Caribbean Secondary Examination Certificate (CSEC) mathematics exams, in addition to other subject areas which saw improvements.

Thwaites, however, bemoaned the fact that there were still too many gaps. He also cautioned policymakers to be diligent in addressing the issues.

"My comment is 'Congratulations! That's wonderful!' (Congratulations) to all concerned students particularly, parents and teachers, too. Any improvement is exactly where we want to go. I'm especially glad that there is an improvement in mathematics," he said.

"Even with that level of improvement, we are way behind international standard and where we want to go, but let's give thanks and press on even harder," he continued.

He noted, too, that overall, there were high percentage increases in economics, additional mathematics, agricultural science, principles of accounts, information technology, technical drawing and theatre arts.

Reid said, too, that 67 per cent of students from public schools who sat the CSEC obtained passes at grades one to three.

"We are quite encouraged by this movement (mathematics) and it is very consistent with the movement we saw also in GSAT (Grade Six Achievement Test). However, there were 13.2 percentage points decrease in English B and 12 points decrease in biology when compared to the previous year, which shows that some work is needed in those areas," he said.

In reporting on the Caribbean Advanced Proficiency Examination results, Reid noted that there was a 3.2 per cent improvement in the 2017 exams.

In the meantime, he said that for the most part, all should be in place for the start of the new academic year. He highlighted, however, that 172 schools have been identified for a critical maintenance programme at a cost of $554.3 million.