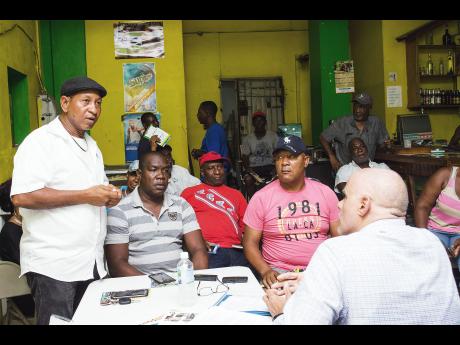 In declaring entertainment the lifeblood of St Thomas, one resident is resolute that the Government should establish special zones for party events within the parish to the benefit of small business folk.

"It is the number one source of income," said businessman Hansel Whyte last Thursday as The Gleaner's On the Corner series with Economic Programme Oversight Committee (EPOC) Co-chairman Keith Duncan made a stop in Duhaney Pen, St Thomas.

Whyte, who operates a small loan company, pointed to vendors, bartenders and wholesales as beneficiaries of the social events.

The businessman, who has lived in the parish for more than 30 years, said the round-robin format of parties required patrons and promoters to travel far apart between events to lend equal support.

However, he argued, the cut-off time stipulated by law makes this difficult, and the events are being shut off before promoters can get maximum mileage.

"Sunday to Thursday is 12 a.m., while Fridays and Saturdays, we can go up until 2 p.m. But most times, the police reach before the liquor even cold. We know the police only enforce the law, so we don't fault them for following instructions, but the Government need to sit down and revisit that legislation, not just to aid St Thomas, but the wider Jamaica," added Whyte.

On same topic, fellow businessman and St Thomas native, Denver Howell, noted that several residents continue to turn to farming for a livelihood despite unfavourable results.

However, Howell said the parish's many natural resources see it primed to capitalise on health tourism, and focus should be shifted to that area sooner than later.

"We have the Blue Mountain range. Many visitors just want to go into the mountainside and listen to the birds sing and look at the beauty of the mountainsides," said Howell, who employs up to 100 persons through his One Touch group of companies, which includes transportation and gas stations.

While stating that the abundance of water sources in the parish speaks well for health tourism, St Thomas businessman Denver Howell said upgrading the Princess Margaret Hospital in the capital, Morant Bay, would be a prerequisite to tapping into the market.

"We have to start training young people in this area. We can't remain stuck at the same stage; we have to move into new territory," Howell said.

"St Thomas has nothing except resources. ... We have to make use of our natural resources if we're to experience growth."