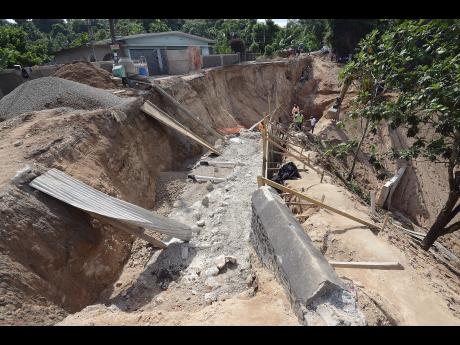 Ricardo Makyn
Work is in progress to restore the damage to the road work in Mount Ogle, Lawrence Tavern, but the residents say it is slow and they are concerned about their safety and that oif their children. 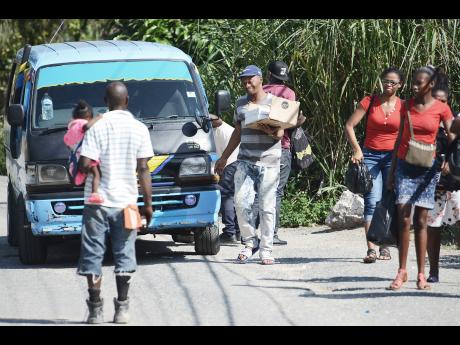 Ricardo Makyn
A bus lets off residents adjacent to the breakaway at Mount Ogle in Lawrence Tavern, St Andrew. 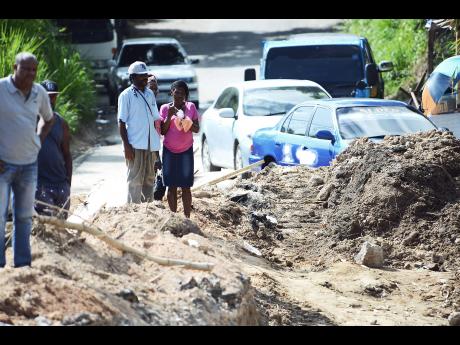 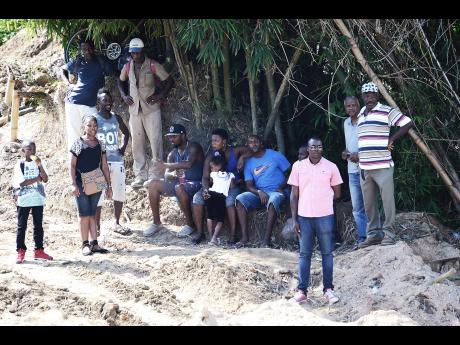 Having seen transportation costs increase by 150 per cent because of a breakaway along the Mount Ogle roadway, residents of Lawrence Tavern in St Andrew have described the situation as "hell on earth" and are appealing to the authorities to speed up repairs.

Last week, the National Works Agency (NWA) advised that the road was impassable and advised the public to use the alternative routes through Stony Hill to Cavalier then into Lawrence Tavern.

The damaged section of the road was closed on June 19 to facilitate three months of repair.

However, with less than two weeks remaining for the start of the new school year, residents are dissatisfied with the pace of the rehabilitative works and are hard-pressed to fund alternative transportation routes.

Brown argued that she would take the #54 JUTC bus at a cost of $200 back and forth between Half-Way Tree and home, but since June, she's had to fork out $150 to get from home to the point of the breakaway, manoeuvre the damaged road, then take a taxi to Half-Way Tree for another $100.

"I have to walk down in the gully to reach the taxis, and it's not safe or healthy. From what I'm seeing, I'd be surprised if it finishes by December. It's especially difficult for the children and parents of children who attend school outside the area because they have to take the long route, and it a go cost," added Brown.

Parent Sandra Burke insisted that the thought of her 14-year-old child regularly taking taxis and Coaster buses instead of the state-owned JUTC is one that sparks fear.

"With all the reports of children being harmed or abducted in recent times, it's scary, not to mention that a child fell the other day while trying to make their way down the gully. It's hell, trust me. Money aside, it's just hell."

Nineteen-year-old Unity resident Abbegail Ferguson, who will attend the University of the West Indies (UWI) September, also voiced her frustration with the situation.

"I already had a tight budget set aside, and now with this, it's depressing. The additional 15-20 minutes to go the other route, plus the additional $300 or so back and forth. It's really not easy, and I just want the powers that be to speed things up, as it's not looking promising."

In describing the breakaway on the Mount Ogle roadway as critical and declaring the area unstable, acting communications manager at the National Works Agency, Janel Ricketts, has said that all means are being exhausted in keeping with the end-of-September deadline.

Ricketts pointed to the constant rainfall and soil type in the areas as great challenges to the work being carried out.

"It rains there almost every day, and with the area being unstable, when you get a heavy downpour, it saturates the area and results in slippage," Ricketts told The Gleaner on Monday.

She added: "We're doubling the efforts, and currently the contractor is running two shifts, night and day, to speed things along."

While noting the additional costs that pedestrians had to bear, Ricketts charged that safety should be maintained above all.

"Even to construct the wall, we've had to build access roads so that the heavy equipment can get there. So, persons may look on and say not much is being done, but you have to lay that groundwork first. So we're building a series of walls, then fill the area up to road level, but we can't do that without putting the necessary infrastructure in place because we have to guard against this happening again in the future. It's not a simple undertaking," said Ricketts.

Works are being carried out by N.F. Barnes Construction & Equipment Co Ltd in Jamaica for approximately $25.9 million.