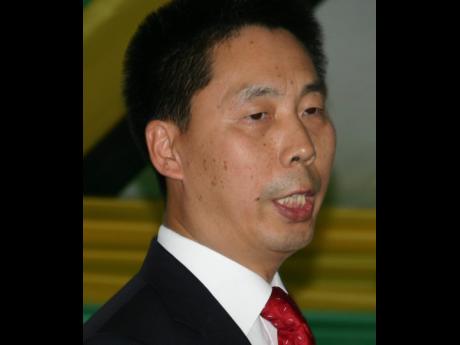 Halt the "ill-conceived" agreement that guarantees Chinese investors US$1 million in the Government Oval project, local construction players are demanding of the Government in an intensification of their lobby against the deal.

It comes as the Chinese ambassador to Jamaica, Niu Qingbao, urged local professionals to stop complaining about alleged unfair competition. In an RJR interview aired yesterday, he said that aggrieved stakeholders should prove "whether they can do a better service".

The ambassador's comment is a reiteration of a statement from the embassy earlier this month rejecting claims by Opposition Spokesman Peter Bunting that the Chinese were taking over Jamaica through economic colonisation.

"Our aim is not to "colonise" Jamaica but to always find areas of cooperation and mutual benefit that will improve the lives of both our people," the embassy had said.

"The proper thing for the Government of Jamaica to do at this stage is to call a halt to this ill-conceived MOU (memorandum of understanding), and to seek consultations with local interests on the right way to proceed," the Construction Industry Council said yesterday.

The council is an umbrella group for construction industry professional bodies, including architects, engineers, masterbuilders, planners, and quantity and land surveyors.

Those groups, among others, have been angry at the Government for accepting the January 5 unsolicited offer from the Chinese to do what the council claims is a project with an estimated construction cost of approximately US$1.6 billion.

The eight-year project will include the Government Oval at Heroes Circle in Kingston, which will include a new Parliament building and space for 17 government agencies and ministries. Project managers, the Urban Development Corporation (UDC), has said more than 300 acres of land will be used in the zone to take in downtown Kingston.

READ: The agreement at www.jamaica-gleaner.com/MoU

The construction council, which has called a press conference for Thursday, said it is "egregious" that the administration signed the 12-month agreement guaranteeing US$1 million, as well as exclusivity, as stated in the MOU obtained by The Gleaner.

"Beyond not being free, this clearly sole-source agreement from an unsolicited offer runs contrary to the Government of Jamaica policy regarding public private partnership," the council said.

According to Jamaica's 2012 PPP policy, unsolicited offers are acceptable in circumstances where the services or products are unique to the company making the offer and should not be connected to plans already being considered by the Government.

But the council said that the offer by the Chinese company "is for services that are not unique and it was widely known that the UDC had been working on the plans for a Government Oval for years". "Based on the Government's own policy, there was, therefore, no justification for this MOU," it added, declaring that the deal was done in "secrecy".

According to the MOU, Jamaica and CCASA held preliminary discussions and the company expressed its "willingness" to undertake the development "and has the capacity to complete the project".

They agreed to work together in relation to the preliminary aspect of the two-phase project. That includes the creation of a development proposal and the sharing of knowledge "with a view to the development of the project".

Additionally, Jamaica agreed that CCASA would submit the design drawings and the budget for the implementation of the project. Financing and contractual arrangements of the project were to be communicated to the Chinese company 10 months after the MOU's signing.

The details of the MOU, the professionals argue, undercut the Government's claim that local people would be substantively involved beyond the preliminary phase.

In a May statement responding to public concerns, the UDC's general manager, Dr Damian Graham, explained that the CCASA was chosen because of its record, adding, too, that Jamaica has done similar projects with Canadian architects.

"The Government identified them (CCASA) as strategic partners because of their share capital, their competence in doing other developments like this, and the fact that they are willing to support us in doing the concept development."

That's the closest explanation from Government following the call by Jeanette Calder, a PPP consultant, for answers as to why there was no tendering, which is a breach of state policy...

5,000 jobs to come from parliament building, downtown project, says UDC
'Stop blaming the Chinese!' - Samuda says 'terrible' fiscal policies drove Jamaica in partnerships
Bunting on a frolic of his own - PNP was not aware spokesman would go public with criticisms of Chinese
Chinese good for Jamaica - Holness
'Chinese hogging construction sector not good'