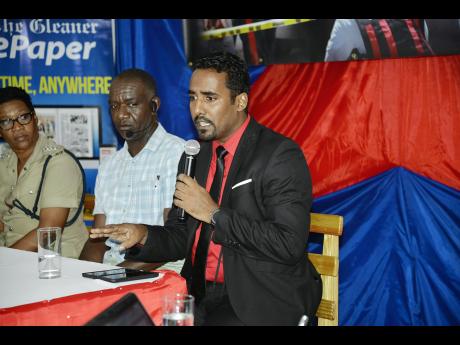 Sergeant Kevin Watson, communication liaison officer for the Jamaica Constabulary Force's (JCF) special Area One Joint Task Force, wants to see social media being used to drive the anti-crime messages aimed at young people, as he believes that most youngsters get their news via mobile apps rather than traditional TV and radio.

Watson says the social-media approach could significantly help to sway the minds of many youngsters, who could be contemplating a life of crime and are not being reached by traditional media.

"We need to find new and creative ways to reach the young people," said Watson, who once led the Lottery Scam Task Force. "I don't think the JCF is doing as much as it ought to, in terms of helping to bring social changes. With everybody on social media now, then it speaks to the power that this platform has.

"Looking at most young people nowadays, you will see them with their smartphones and they are into the Facebook, Snapchat and the Instagram. This is how you are going to get them to listen ...; utilise social media," said Watson.

For several years, Watson has been using various social-media platforms to both educate and appeal to Jamaicans about the law as well as the dangers of crime and violence. His primary platforms are his Facebook page and his YouTube channel, The Noble Cop. Both were created in 2013.

"The Noble Cop channel has been getting a lot of traction with many favourable responses from the videos and it speaks to the magnitude of how effective social media can be," said Watson. "I am able to see the age group of the majority of people who watch the videos."

According to Watson, 25-35, followed by 18-24, are the main age groups that tune into the anti-crime videos.

"A recent video opened the mind of many persons who thought that ganja was legal when it is not. So I think these are the kinds of things that we need to be doing, to reach the persons who are ignorant of the law," added Watson.