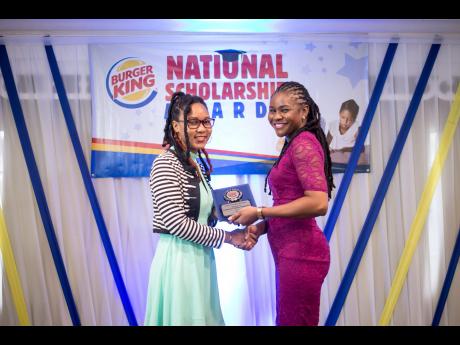 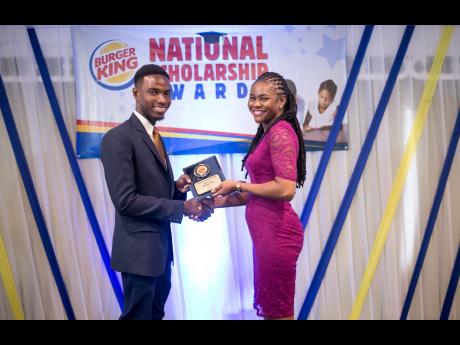 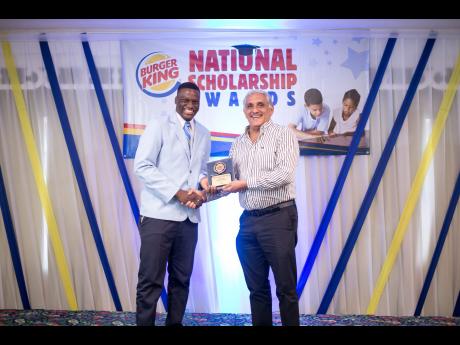 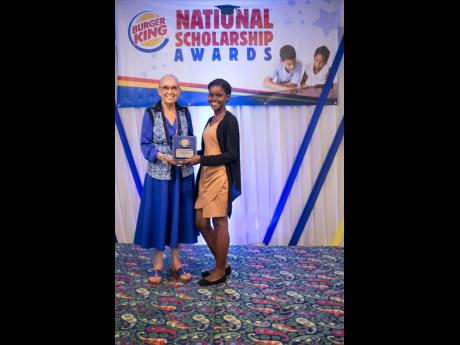 As a result of a combined $2.2 million courtesy of the Burger King Scholarship Programme, four youngsters in pursuit of tertiary credentials have vowed to rise above their current social standing while heaping praises on their single mothers for their continuous stewardship.

The chosen crop of students, three of whom hail from inner-city communities and attend prominent high schools, were honoured at the Burger King National Scholarship Awards Ceremony on Wednesday at the Knutsford Court Hotel in Kingston.

When quizzed by The Gleaner, each scholar described the distinction as simply "awesome".

For 19-year-old Tassan Stewart, recipient of the Lois Sherwood Scholarship, the prospect of attending the University of the West Indies (UWI) in September to major in software engineering was a daunting one a few weeks ago.

"I didn't have the slightest clue where the funding was coming from," said the St Andrew High School graduate and Mountain View resident.

Stewart, who will also read for a minor in mathematics and finance, named her mother as the primary supporter of her goals and dedicated her accom-plishment to young girls who are not financially stable but who have the potential to accomplish great things.

"Coming from an inner-city community has never fazed me as many successful persons have conquered greater challenges. Perseverance and trust in God is everything," added Stewart.

A native of Dunkirk in east Kingston, Nunes, 19, attained 21 subjects in CSEC and CAPE in seven years at the North Street institution.

"The moment I entered sixth form, I asked about the various scholarship opportunities and prerequisites and made myself marketable for them," said the Rodwell Lake scholarship recipient, who starts the UWI in September.

"I dedicate all my success to my mother. I've been through many challenges, especially with the death of my father through illness, and she's been there for everything. I use my surroundings as daily moti-vation to inspire me to be the very best."

Raised in the ghetto but not confined to its borders

Jamaica College student Akeem Neil said that the scholarship he received serves as a platform to elevate not only his social standing, but also the image of his Rockfort community in east Kingston.

Neil received the Open Tertiary Scholarship and will pursue studies in actuarial science at the UWI in September.

"It's a good contrast to how my community is now, with all the violence and gang activity. My plan was student loan, so this will save me from having to pay back a considerable amount of money in the future," said the 18-year-old.

He further shared: "As much as this scholarship means to me, it means even more to my mother. She feels good knowing that although she's from the ghetto, the child she has raised in the ghetto isn't confined to its practices and borders."

Recipient of the Edna Manley Art Bursary, 22-year-old final year student Sasheina Williams, stated that the funds would go directly to her tuition.

While admitting to having a relationship with her father, Williams underscored that the scholarship was dedicated to her more than supportive mother.

"With the scholarship going towards the tuition, I can focus on finding the funds to do the final-year show, which is usually upwards of $200,000 per person to get all the material and set up your space. I just want to thank my mother for always, somehow, finding the funds for me to continue my education. I also thank Mr Prince from Edna (Edna Manley College of the Visual and Performing Arts) for advising me about the opportunity."

Williams aspires to play an active role in the local film industry while becoming a graphic designer.

The ceremony saw Burger King awarding approximately $4.5 million in scholarships, bursaries, and grants to tertiary and other students, which brings its contribution to education in Jamaica to more than $30 million over the last 17 years.

Speaking with The Gleaner, Head of Sales and Marketing Sabrena McDonald Radcliffe said that the brand continues to look at ways in which it can expand to suit the country's educational needs.