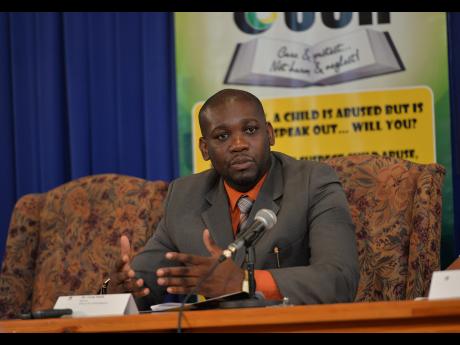 The number of children reported as missing across Jamaica has been on the decline in the past three years, and Registrar of the Office of the Children's Registry (OCR) Greg Smith is crediting this to the work of the Ananda Alert Secretariat.

Data from the Missing Persons Unit of the Jamaica Constabulary Force show a six per cent decrease in the number of children reported missing over the first seven months of this year compared to the corresponding period last year.

"The Amanda Alert Secretariat has doubled its efforts in not only working with the police, but other stakeholders," said Smith.

"More so, the Jamaica Fire Brigade has been providing first-respondent training to not only the OCR staff, but also to persons within the field and the geographical areas that we would have seen, over the years, a number of children going missing.

"So not only that there might be fewer children being reported missing, but I think the contributing factor is the activities that we would have been adding to the mechanism of the Amanda Alert Secretariat, such as search- and- rescue training, the public education that we have been doing ... and more so, our on-the-ground activities, which led to us having our first National Missing Children's Forum in May," added Smith.

Child advocate and founder of Hear The Children's Cry Betty Ann Blaine said while she celebrates the downward trend in the number of children being reported missing, she remains concerned that some parents are not reporting habitual runaways.

"What we don't know with any certainty is why it is that fewer people are reporting," said Blaine.

"From the phone calls we make, the ones who are habitually missing, usually, they are not reported. The parents will tell us that they just can't bother to report the child because they go missing so regularly. Our records show 59 cases or habitual missing from January to June of this year.

"It would be a serious case if children are going missing and it is not being reported, thinking that the child has gone down the road or gone with a friend and will come back tomorrow," added Blaine.

She argued that most of the children reported missing are new offenders with the majority being teenage girls who go away with friends and stay away on average three to four days.

The police have also reported that as at August 17, 159 of the 1,032 children reported missing over the first seven months of the year were still unaccounted for, while two were found dead.

But Smith believes the number of children still missing could be far fewer as persons are not reporting when children return home.

He noted that for the first six months of this year, the registry has seen where nine out of 10 children reported missing returned home with most doing so voluntarily.

"We are currently doing public education, encouraging individuals that once a child goes missing and returns, they make the report to the OCR or nearest police station," said Smith.

"Sometimes parents fail to make the reports that these children have returned, especially the girls, because they would have to do some examinations at CISOCA to make sure that they weren't physically or sexually abused," added Smith.