Cruel in Clarendon - Parish joins Hanover, Kingston and St James as the most murderous places for Jamaica’s children 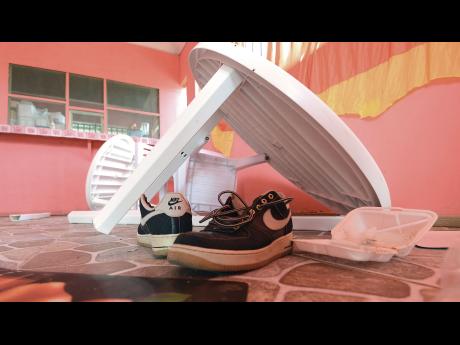 Ricardo Makyn
The clear signs of the terror which ensued when gunmen opened fire at persons in a bar in Race Course, Clarendon, last Thursday.

The murder of two more children in Clarendon last week moved the number of Jamaica's youngest killed in the parish since the start of this year to five and placed it among the deadliest parishes for children.

St James has recorded eight children killed since the start of the year to have the dubious record at the top of the pile, with five children killed in both Hanover and Kingston.

The latest victims in Clarendon were six-year-old Timothy Bassaragh and 14-year-old Shaniel Bartley, who were fatally shot hours apart between last Thursday and Friday.

Timothy was murdered in his sleep - shot in the throat and head - as he slept in a room with his mother and two sisters.

The gunmen fired blindly through the family's front door. One of the shots went through the boy's throat and into his mother's arm, which, her relatives said, was shattered on impact.

The other persons killed in the Race Course incident were 24-year-old Amoy Ricketts, and Randy Ranger, 33; while Bartley's mother, a man identified only as 'Kirk', and another called 'Chef' were injured.

"I think we have hit rock-bottom. We have hit rock-bottom when we kill children and we not even bat an eyelid and we proceed with things as normal," Nadeen Spence, social commentator and chairperson of the I'm Glad I'm a Girl Foundation, told The Sunday Gleaner as she reacted to the latest killings.

"We have totally lost our hearts. We have gotten so used to the murder and the mayhem that nothing shocks us anymore.

"We have become completely desensitised to murder. I think it's only if it is in your family that particular groups of people will feel the devastation," added Spence.

Police suspect that Timothy was killed by gunmen who turned up at his house in search of an alleged gangster who would frequently visit the area.

In the wrong place

Shaniel and Ranger were simply in the wrong place as police theorise that the gunmen may have been after Ricketts, who scampered as her attackers peppered her with bullets before turning their guns on the other victims.

"We are probing several leads to include flour being replaced for coke in a drug transaction; and also leads relating to the incident being a reprisal for other crimes," offered Superintendent Vendolyn Cameron-Powell, who visited the scene and expressed sorrow at the killings.

Shaniel's father is a serving member of the Jamaica Constabulary Force (JCF), and her killing especially, hit his colleagues hard.

"It has been a devastating and sad day in our parish. The JCF family is mourning with Constable Bartley. I must call on all law-abiding citizens to work with us in the recovery of illegal guns, which is definitely our challenge," said Cameron-Powell.

At least 37 children have been murdered across the island since the start of this year. This is 13 more than the 24 killed during the corresponding period last year.