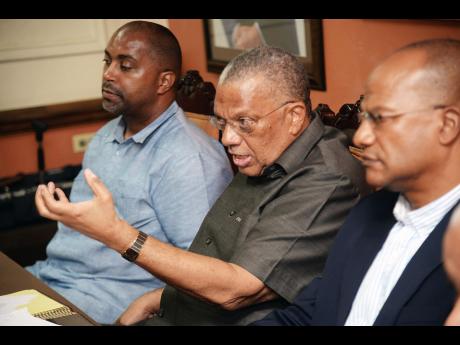 One hundred and fourteen persons were murdered across Jamaica over a 20-day period that ended on Saturday. That is according to the latest statistics compiled by the police, and equates to an average of five murders per day between August 5 and the weekend.

The Jamaica Constabulary Force's (JCF) Periodic Serious and Violent Crime Review revealed, too, that five parishes have each recorded more than 100 murders since the year started.

Up to Saturday, according to the police, a total of 1,005 people were killed across the island this year, a 24 per cent increase, or 197 more than was recorded for the corresponding period last year. There were 891 reported murders up to August 5.

Clarendon, which has been at the epicentre of the latest crime wave, recorded another murder on Monday after gunmen opened fire on residents in separate attacks. Two children and two women were among 10 persons killed in the parish last week.

Phillips also took aim at the Government's signature crime-fighting initiative, the zones of special operations legislation, which was passed into law last month.

"The fact is that since the governor general signed that legislation into existence, nothing has happened, except that 150-plus Jamaicans have been murdered in that time," he asserted during a press conference at the party's St Andrew headquarters.

"I would have thought that the urgency [with which the legislation was led through the Parliament] reflected a determination on the part of the Government to act on the legislation. That's not the case, and I'm still left to wonder why the rush."

According to Phillips, most Jamaicans are "appalled and shocked" at the failure of the Andrew Holness administration "to act in the face of the spiralling crime rate and out-of-control murder rate.

"A mood of hopelessness is gripping the nation as marauding gangsters take control of our streets and communities. Nobody is safe," he said.

With four months remaining in the year, the JCF data paint a dismal picture, with all but six of the 19 police divisions nationwide reporting an increase in murders, the majority of them by double digits. In St Andrew North, murders are up 129 per cent, 104 per cent in Hanover, and 97 per cent in St Andrew South.

Amid the mayhem, however, Portland remained the safest parish, with five killings so far this year.