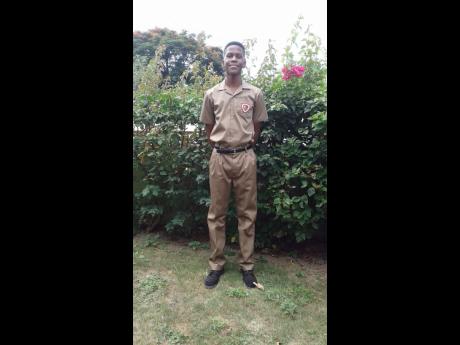 Learning is no competition, and once students make the quantum leap from primary to secondary education, it will serve them better to work towards individual targets rather than trying to keep pace with others for the top spot, according to last year's Grade Six Achievement Test (GSAT) leading performer, Jonathan Morgan.

As a result of his perfect 100 per cent showing in the primary exams, Morgan was awarded the prestigious Scotiabank Foundation top male achiever scholarship, which will take him through to upper sixth form at Campion College.

However, while his mastery of the five subject areas ranked him first in the island, Morgan has advised the more than 38,000 students progressing to secondary schools in under a week that a shift in focus from self to others can lead to major disappointment.

"You must aim only to be the best you, know your capabilities and set the bar accordingly," the former Hosanna Preparatory head boy told The Gleaner yesterday.

"At my school, it doesn't matter who you are or how high your average was coming into the school. That doesn't even guarantee you a spot in the top 10 in the class," said the young man who placed second with a 93 per cent average in his first term, followed by averages of 89 per cent and 92 per cent.

He cautioned: "You're not babied when it comes to how the teachers treat you. Teachers will spend less time on a topic, use less of the board, and give less notes. Also, you might not be taught everything in class that you need for an exam, so extra research outside of class is a must. Most times they will send PowerPoints, give you handouts, or refer you to read pages in a textbook. You have to ensure that you follow the teachers' instructions."

In reiterating that both academic and social challenges are to be expected in a new environment, the 13-year-old astrophysicist hopeful stressed that the support system of central persons will become even more integral.

Morgan argued that had it not been for his parents, family and teachers encouraging and reminding him of his innate ability that brought him to Campion, he, too, may have fallen victim to complacency.

To this end, his father, Earland Morgan, agreed.

The senior Morgan argued that parents should throw full support behind their children, while appealing to educators to continually develop creative methods of teaching.

In relaying his last bit of counsel to the thousands of incoming first-formers, the teen stressed that success wouldn't be determined by the name of the institution.

He reiterated: "You are your biggest competitor. Only ever compete with yourself. Don't ever set your standards based on what others are doing around you, so if others aren't doing well, it shouldn't affect your goal."

- Set a goal and work towards it. Though distractions are plentiful, block them out.

- Avoid complacency. Never believe that you're above anyone else, and in so doing, take your school work for granted.

- Never procrastinate, and don't be discouraged by new challenges.