No Gov't bailout - Public funds will not be used to rescue closing private schools, says Reid 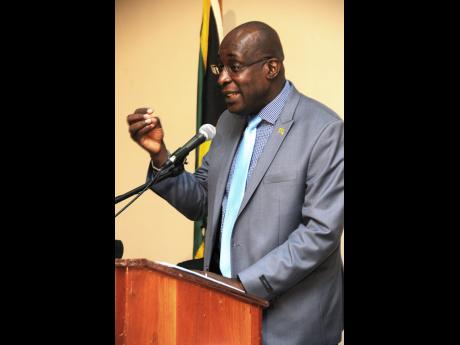 Minister of Education Ruel Reid has cited changes in the education sector, including the increase in the number of available public-school places, as reasons for the closure of several privately operated institutions in recent years, warning that the Government will not be offering a bailout to private businesses using public funds.

"This is a natural shift in the education landscape and, from a private point of view, it's a business, and if the demand is not there, the business will have to transition to something else," Reid said.

"Things do change, sectors change, economy changes. We had, couple years ago, the whole financial sector meltdown, so the issue of St Joseph's High is a reflection of a changing demand in the education sector, because St Joseph's was a private high school, which means there aren't enough private students enrolling, as there are enough public-education places that are free. It's a case of supply and demand."

Reid, who was the keynote speaker at a luncheon put on by the Rotary Club of Kingston at The Jamaica Pegasus hotel yesterday, told journalists that a shift in demographics is also to be blamed for the closures.

"A couple of interesting demographic issues are emerging that our actual population of children have declined by more than 25 per cent over the last decade," Reid said. "And so, what you're seeing is that you have far less persons having the financial wherewithal to fund their children through private education."

St Joseph's High School became the latest to shutter its doors, citing the dramatic decline in registration as a key factor when it ceased operations yesterday after close to 40 years of serving the education sector.

It has joined a long line of others that have closed their doors over the last five years.

A MATTER OF SUPPLY AND DEMAND

The education minister said that a strategic buildout of classroom spaces in recent years has given more options to parents, who, because of the economics of it, have chosen to access education for children through government-funded schools.

"We have created, equally, more capacity in our public primary and high schools, so there is no longer any shortage of space at that level. In fact, a lot of our primary schools are underpopulated, which is one of the reasons why we are adding infant departments to them," said Reid.

"In addition, we have had, over the years, a number of private preparatory schools closing, and there are very few privately owned high schools that are viable."

He noted that it would be unwise to use public money to fund private businesses, even if that business is a school, reasoning that it is a matter of supply and demand.

"If you set up a private school and it is not viable by way of demand and supply, you can't come now to Government asking for bailout. What I am saying, therefore, is that they (private schools) will have to re-engineer and transition into new things in this new landscape," said the minister.