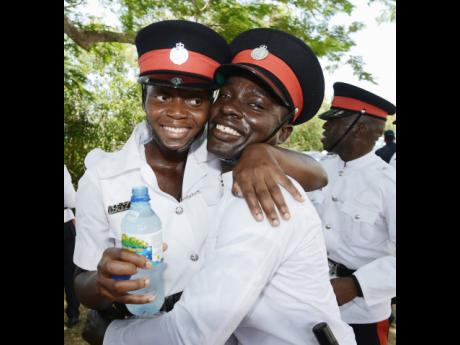 National Security Minister Robert Montague said police officers are leaving the force faster than the Government is able to train them, citing an attrition rate of 500 cops per year.

Speaking at the passing out parade for 199 police officers at the National Police College of Jamaica in St Catherine yesterday, Montague stated that at present, the Jamaica Constabulary Force (JCF) would need another 3,000 lawmen to bring the compliment to 14,000 in order to meet the required capacity.

"The ministry continues to find ways to increase recruitment and retain police officers, so that the JCF can have the human resources it needs to carry out effective policing and in turn assist in reducing the crime rate," he stated.

"Recently, the JCF signed a memorandum of understanding (MOU) with the University of the West Indies (UWI) to provide the JCF with facilities at the university for training and accommodation of recruits. This will allow the JCF to train more police officers, to provide additional training and maintain an acceptable level of police officers."

USE TECHNOLOGY TO FIGHT CRIME

According to the minister, under the partnership, 300 recruits of the police force will be housed and trained every six months for a period of three years.

He also disclosed that under the MOU, UWI will provide training in the development of apps, underscoring the need to use technology to help win the battle against crime.

"We are no longer fighting just criminals on the ground, we are fighting them in the air and in cyberspace," the minister observed.

Montague stressed that the Government's planned modernisation of the force cannot be successful without the support of all police officers, and as part of the ongoing reform process, graduates will be taken through a new training curriculum that is critical to understanding modern policing.

The national security minister made a special appeal to the police hierarchy to speed up the promotion of hard-working officers and the Police Services Commission to do likewise for gazetted ranked officers.

Deputy Commissioner of Police Novelette Grant, who represented the police commissioner, implored the graduates to observe professional standards in the execution of their duties.