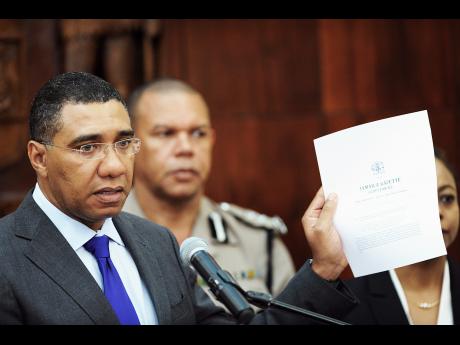 Given the number of murders that have been committed in Clarendon in recent weeks, many persons, including Opposition Leader Dr Peter Phillips, expected that the much-anticipated first zone of special operations (ZOSO) would have been declared in that parish.

It was, however, Mount Salem and its environs in the parish of St James that were swarmed by hundreds of security personnel yesterday morning, leaving Phillips puzzled.

"What needs to be explained is why the particular selection of Mount Salem, because over the last few weeks, if not months, the centre of violent criminal activity has not been Mount Salem and its environs, but has been on the south coast," Phillips said.

But Acting Commissioner of Police Clifford Blake said the decision which was made by Prime Minister Andrew Holness, based on the advice of the National Security Council, to declare the first ZOSO in Mount Salem and its environs is supported by police statistics.

Blake pointed out during a press briefing held at the Office of the Prime Minister yesterday that in 2014 there were 46 murders recorded in Mount Salem and its environs; 70 in 2015; 85 in 2016; and 54 so far this year - 16 of which have been committed in the Crawford Street community alone.

"While some of these gangs are not actually domicile within this geographical space, they do continue to have significant impact in Mount Salem, and they are spreading their influence right across the community," he said. "The object of the zones of special operations is to disrupt and dismantle these gangs and create a safer community."

Prime Minister Holness noted that while there are other communities like Mount Salem, the decision to start there is based on historical data, as "the zone is not designed to be a reflex response to flare-ups".

Holness added, "Certainly, Mount Salem recommends itself when you look at the murder statistics as one variable. Citizens who are at this time anxious to see action in their community should maintain their hope and faith because there will be other zones declared in short order."