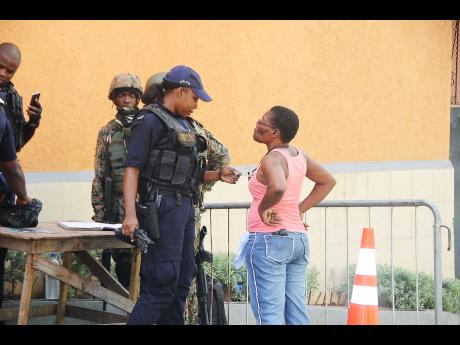 Adrian Frater
This Crawford Street resident (right) appears annoyed as she waits on a policewoman to check her ID. 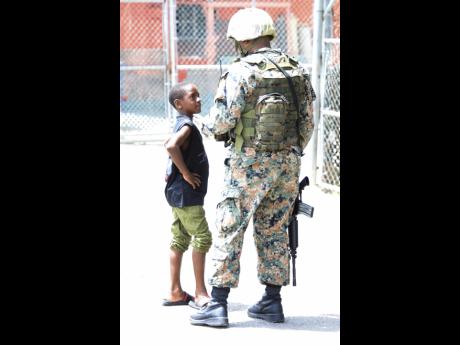 Jermaine Barnaby
A young boy stands at ease as he speaks with a soldier in Mount Salem yesterday. 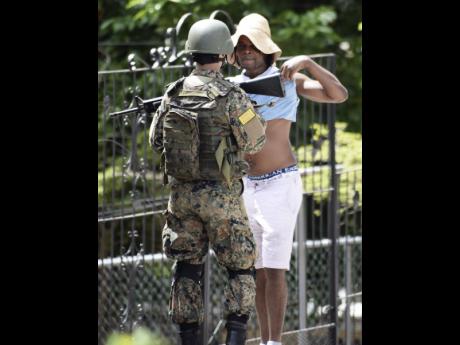 Jermaine Barnaby
A young man presents himself for a search in Mount Salem yesterday.
1
2
3

While, for the most part, the interaction between members of the security forces and residents of Mount Salem, St James, has been good in the first two days since the area was declared Jamaica's first zone of special operations (ZOSO), there are growing concerns about the demand for persons to show picture identifications when entering or leaving the community.

Yesterday, there were some contentious interactions at checkpoints as some residents showed up without proper identification.

"Me hungry, me nuh nyam nuttin from yesterday ... me wah go out a de shop go get something fi eat," said an elderly man, after he was blocked at a security forces checkpoint on Crawford Street.

"This is foolishness. You mean me must stay a mi yard and dead fi hungry because me nuh have no ID. Me is not a gunman. Me never see inside a jail from mi born," declared the elderly man with expletives liberally added.

But Superintendent Stephanie Lindsay, head of the police Corporate Communications Unit, argued that the demand for a proper identification could not be avoided.

"I am urging the residents to walk with a photo ID because if you don't have one, it might result in you spending a long time being processed at the checkpoint," said Lindsay.

"We know many residents are feeling that they are being inconvenienced, but we are encouraging their full cooperation," added Lindsay.

That was no solace for some residents who told our news team that they were unable to complete back-to-school shopping yesterday as they did not have the identification documents demanded by the members of the security forces manning the checkpoints.

"Right now me having mixed feeling about this ZOSO thing, me want the crime fi stop, but at the same time, we have we life fi live," said Maxine Smith, a resident of Clarke's Street.

"I want to know what is going to happen on Monday morning when we are supposed to accompany our children back to school," added Smith.

Despite the concerns, the residents were given a lift when it became clear that the final of the Mount Salem Community Corner Football League, which is being staged to promote peace in the community, could still take place this afternoon, despite the security operation.

"We are in discussion with the ground commander and things are looking quite good," said Liza Blair, one of the organisers of the competition.

"Based on the discussion we have had, we might be asked to play the game earlier than we had planned to. Also, the spectators would have to go through the various checkpoints with valid IDs to come and watch the game."