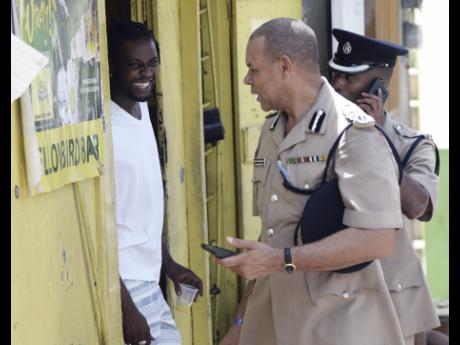 Jermaine Barnaby
DCP Clifford Blake (right) in light discussions with a patron of a bar in Mount Salem yesterday. 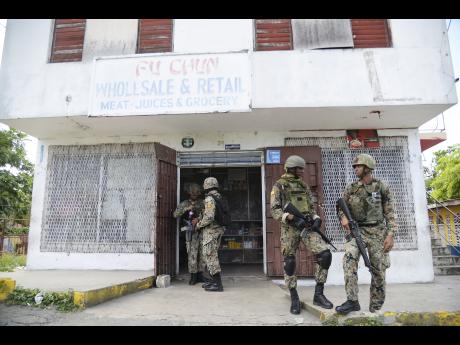 Jermaine Barnaby
Business operators in Mount Salem say they expect a fallout from scenes such as this one, where soldiers gathered outside a wholesale in Mount Salem yesterday.
1
2

Some businesses in Mount Salem, St James, are reporting up to a 15 per cent decline in sales since last Friday when the area was declared Jamaica's first zone of special operations (ZOSO).

But despite the reduction in sales, the business operators have almost uniformly welcomed the presence of the members of the security forces.

"I am strongly in support of this move despite it having affected my business quite a lot," proprietor of Queen's Supermarket, King Lu, told The Sunday Gleaner yesterday.

"I support the Government in every move to fight crime and I am willing to make the sacrifice," said Lu.

"I think the area (Mount Salem) has come to a point where it (ZOSO) was needed, and my personal view is they should have come earlier.

"So it is a bit disruptive, but we don't mind. This community needs to be united and needs a change for a better future."

Lu's views were shared by Omar Jacks of S&J's Retails, who believes that it was either drastic measures being taken or "everybody dies".

"So they had to take control, as it is either the operation or the violence with the innocent, good, bad, everybody dying," said Jacks.

Eighty-four-year-old Irile Miller, who operates a little stall at the entrance to Campbell's Lane, said while her livelihood has been significantly affected by the massive security operation it does not bother her.

"Through this, now things kind a slow, all this morning mi had to throw weh around five dozen ackees because they spoil as yesterday morning mi couldn't sell," said Miller.

"But mi have to live wid it. Mi nuh feel no way because mi glad fi what the police and soldiers doing."

Several other business operators expressed similar sentiments, with bar operator Juliet Turner only bemoaning the fact that she was ordered to close her bar early last Friday.

"When they lock down the business places at 5:30 p.m. we don't make any money," Turner argued. "They need to give us until around 9 p.m.," added Turner.

Councillor for the Mount Salem division, Kerry Thomas, said while businesses will definitely be affected by the prime minister's decision to declare Mount Salem a zone of special operation he is urging the residents to cooperate with the security forces as the steps being taken are necessary to have a safer community.

"With the restricted movements I am sure the businesses are going to have to close earlier," said Thomas.

"But it is just part of what is necessary to ensure that in the future they will be able to make more (money) because more people will come into the area."

Responding to the concerns of the business operators, Deputy Commissioner of Police Clifford Blake, who toured the area yesterday, said a daily assessment will be carried out to determine how late business places will be allowed to remain open.