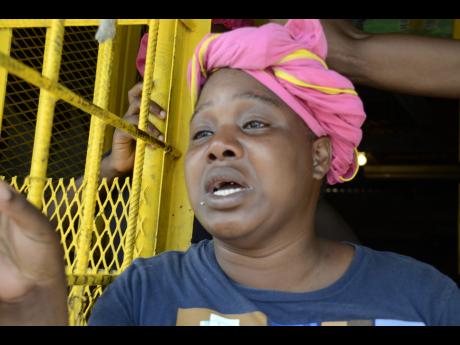 Errol Crosby
Tameka Graham, mother of 11-year-old Michael Keating, who was shot in the face and killed in Rema, St Andrew, on Sunday.

Described by his mother Tameka Graham as a "good youth", 11-year-old Michael Keating had been all fired up, anxiously anticipating the rough preparation he would have embarked on for the sitting of the Grade Six Achievement Test in March next year.

But on Sunday night, the promising youngster died after being shot in the face while at home in the St Andrew community of Wilton Gardens, commonly called Rema.

He was to enter grade six yesterday morning at the Boys' Town All-Age School in Kingston.

"Mi son a good youth. Him helpful and him nuh give trouble. Him love run joke. Where him dead, him have him book dem, him bag and shoes dem. A fix him a fix up him bag. Him did a fix up him bag and a ask mi fi marker fi write him name pon him book dem. But him put back the book dem inna di bag because mi tell him don't write pon dem," an emotional Graham told The Gleaner yesterday.

Keating's five-year-old sibling was admitted to hospital after being grazed by the same bullet that killed the young boy.

An official police report stated that the preteen, of a Fifth Street address in Kingston 12, was shot in the face around 9:35 p.m., shortly after a man entered his home.

After hearing an explosion, relatives reportedly made a check inside the house, where Michael was found in a pool of blood on the floor. He reportedly had one gunshot wound to the face. He was subsequently taken to hospital, where he was pronounced dead.

However, contradictory reports have since emerged regarding the nature of the child's death.

Sources have told The Gleaner that the boy may have been killed while playing with a "careless gun" belonging to a relative. The source explained "careless gun" to mean an illegal firearm.

The mother, however, was confident that a man well known to her and the rest of the community was responsible for taking her son's life. She also alleged that the person suspected of killing Keating may have done so due to a conflict with the child's grandmother on Friday.

"Mi deh outside and di youth come and seh him a beg ice water. Is a youth weh deh round we every day. When him go een, about three minutes after, mi hear di explosion. When mi hear di shot, mi hear di youth seh, 'RJ shoot himself!'. When mi go inna di house, mi see him have di gun inna him hand and mi pickney a point pon him and waa seh something but a pure blood a come from him nose," Graham stated.

"Is a youth weh come and deh over the JP (justice of the peace). We just seh if a fi him family, him cool den."

She continued, "Him and mi modda kick off because him thief money and did affi pay back. Him used to sell fi har down at her stall and him tek weh di whole a di money. Around four weeks now him thief di money, but Friday gone, him give her the last $8,000. He had $13,000 fi har."

Following the incident, the boy's father was rushed to hospital after collapsing. However, Keating's mother said she had no knowledge of his current whereabouts.

"Mi nuh know weh him deh. When mi deh a hospital, mi see dem push him een pon stretcher cause him drop down. Mi nuh see him and mi nuh hear from him [since]," Graham said of the child's father.