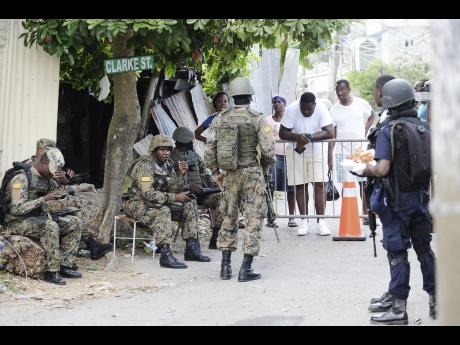 Jermaine Barnaby
Security forces on the ground in Mount Salem in Montego Bay, St James, within the zone of special operations on the weekend. 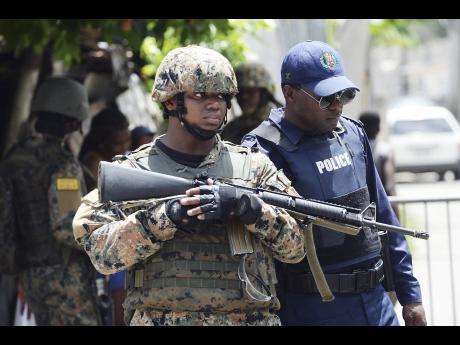 File
Security forces on the ground in Mount Salem in Montego Bay, St James, within the zone of special operations on the weekend.
1
2

Some communities surrounding Mount Salem in Montego Bay, St James, that many believe should have been included in the zone of special operations, could come up for consideration once the security forces have completed the ongoing exercise, which is slated to last for a minimum of 60 days.

Responding to questions at a press conference in Montego Bay on Sunday, Prime Minister Andrew Holness, who steered clear of allegations that he had acted on incorrect data, did not rule out expanding to other communities, once Mount Salem was considered clear.

"That is something that would be worthwhile considering," said Holness, "but as you said, it would be after Mount Salem has been cleared."

Following the release of a report by the Jamaica Constabulary Force (JCF) that there have been some 54 murders in Mount Salem since the start of the year, statistics that caused the prime minister to state that, 'Mount Salem had selected itself', residents have been hotly disputing the figures.

According to Phillipa Lee, a respected youth voice in Mount Salem, her calculation showed her that there have been no more than 14 murders, which caused her to confidently declare that, at best, the prime minister was given false information.

With more and more persons - including Kerry Thomas, the councillor for the Mount Salem division, and former Central St James Member of Parliament Lloyd B. Smith - challenging the accuracy of the police data, unconfirmed reports surfaced yesterday that the prime minister had called an emergency meeting with high-level members of the JCF to explain the discrepancy.

"I have heard little whispers going on about it, but I can't confirm whether it is true or not," said a well-placed police source. "If it is true, I am sure it will come out in the wash sooner or later."

Yesterday, residents continued to rubbish the police figures, which they say have given the community a Wild West status. They consider this very unfair, considering the notoriety of other communities in St James.

"I would be dishonest if I said that I don't believe that there are illegal guns in the community, but the impression that we were like the Wild West was a most unfortunate picture to paint," said Ransford Barnes, who, nonetheless, welcomed the presence of the additional police and soldiers in the parish. "The one problem I have is that their claim is based on fake news."

The report that Crawford Street, long considered the hotbed of violence in the community, has had some 16 murders since the year has badly infuriated Kerry Thomas, the councillor for the Mount Salem division, who is also rejecting claims that there are 12 gangs operating in the community.

"We don't have 12 major gangs domiciled in Mount Salem; that is not true," said Thomas. "The murder tally is also wrong, we have not had 54 murders in Mount Salem."

Smith, a noted publisher in Montego Bay, also took issue with the murder stats and suggested that having been misled, and based on the bad rap Mount Salem has got on account of the wrong stats, the prime minister should consider an apology.

"Based on my calculations, there have been no more than 14 murders," said Smith.