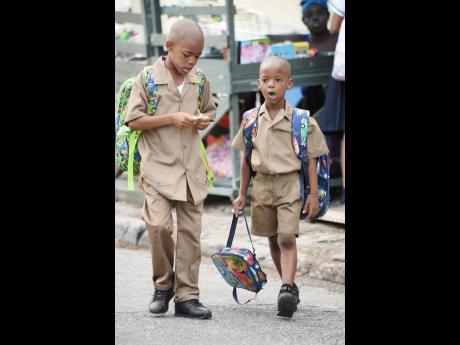 Jermaine Barnaby
These youngsters make their way to Calabar Infant, Primary and Junior High School in downtown Kingston on their first day back at school. 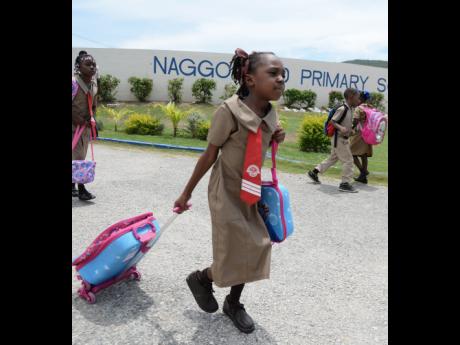 Jermaine Barnaby
It was an early start for this young lady at the Naggo Head Primary School in Portmore, St Catherine. 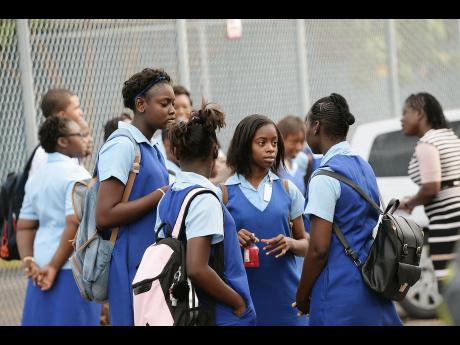 Some schools are still having to make do without the much-needed furniture that was promised by the Ministry of Education, even as they welcomed students for the start of a new academic year yesterday.

In one such case, it is believed that at least two classrooms' worth of desks and chairs was required to satisfy the needs of Gaynstead High in St Andrew. In addition, the institution was still waiting for the delivery of government-printed textbooks.

Principal Jacqueline Boyd-Vassell shared her annoyance with The Gleaner.

"It is a really frustrating time, because while we intend to make the best start possible, I feel that more could be done by the Ministry of Education in terms of the books and, of course, furniture," Boyd-Vassell said.

"We are trying to hold things together, but we are badly short of chairs and desks. The few books we do have means we cannot share those out, as we would most definitely come across as being unfair, so we just have to wait on the ministry."

She said that the education officer who has responsibility for her school is aware of the situation and that all she can do is to hope for a solution by the end of this week.

"Getting the furniture is important, but having the books carries far more importance. We should have hit the ground running," the principal said.

The school managed to repair more than 200 pieces of furniture during the summer, Boyd-Vassell explained, but was still lacking a further 60 sets.

Principal Andria Givens said the school is in need of more than 60 pairs of desks and chairs.

Givens expressed her displeasure at having to resort to using old furniture instead of the new set that was promised by the ministry.

"We are in need of approximately 60 chairs and desks in grade one alone. We were expecting them, but we never received any, so we have gone back to using the old ones," she said.

Calabar Infant, Primary and Junior High School on Sutton Street in downtown Kingston is also among those yet to receive its allotment of furniture.

"We were told by the ministry that distribution will take place this week for the students, while furniture for teachers will get done by the end of the month," said principal Joset Leslie.

Meanwhile, there were positive indications for a good start to the new school year at The Queen's School and Denham Town High, both in St Andrew.