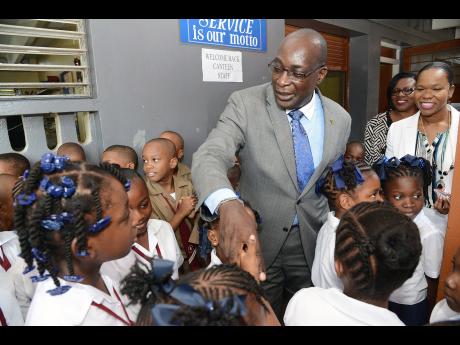 Rudolph Brown
Education Minister Ruel Reid and Captain Kasan Troupe (right), director of regional educational services in the Ministry of Education, Youth and Information, speak to students at the Half-Way Tree Primary School yesterday as the new school year got under way.

Indicating that there were no reports so far of students being reprimanded for inappropriate attire, Education Minister Ruel Reid said his ministry expects that a standardised policy should be established by the end of September.

Giving his assessment on the start of the new academic year, Reid said he still expects that there will be an understanding among all stakeholders until a policy is implemented.

"Unfortunately, we were not able to conclude the policy ahead of the start of the school year. We are making sure we do the necessary consultations, getting the National [Secondary] Students' Council and other youth groups to be a part of the final document. By the end of September, we should have that document ready," Reid said.

"In the interim, we did indicate to the schools that while they are allowed under the regulation to set their rules, and there needs to be a set of consultations, there is understanding on the part of students and parents that the policy must be ratified by the board, so persons are very clear what their rules are. You need to demonstrate very clearly and graphically what you mean by the various standards that you are setting."

In the meantime, Reid said a demonstration by residents in Kellits, Clarendon, and road repairs close to the Lawrence Tavern, St Andrew area caused delays for students getting to school on time yesterday.

However, he pointed out that most schools reopened incident free.

Reid also noted that the Government's efforts of providing funding to institutions from as early as July benefited the overall preparedness of schools.

"Externally, a couple challenges were identified not directly related to school, but in terms of students having some trouble accessing school this morning (Monday). There were reports of road repairs taking place in and around the Lawrence Tavern area, which would affect students going to the Lawrence Tavern Primary School, among schools in that area. However, alternate routes were established," the minister stated.

He also said there were no reports of adverse challenges in Montego Bay, St James, especially in light of the intense security presence in the Mount Salem community, which was last Friday declared Jamaica's first zone of special operations.

Reid sought to reassure persons living in trouble areas that special arrangements are being made to ensure that students can access schools without hassle.