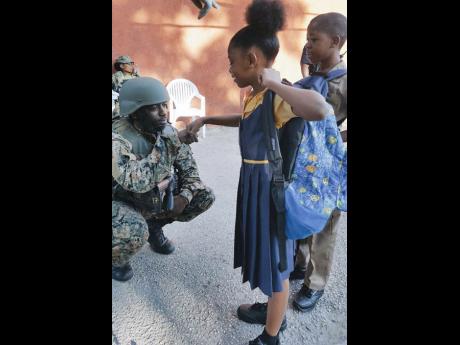 A member of the zone of special operations joint force interacts with students in Mount Salem, St James, on their first day back to school yesterday. 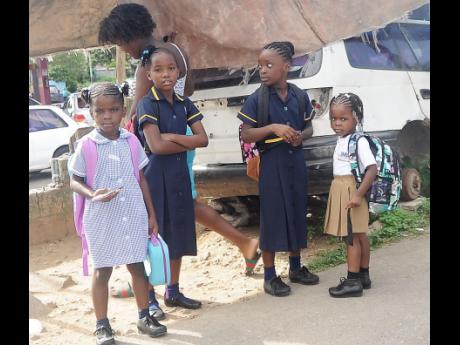 Students wait while their parents are being processed during the zone of special operations in Mount Salem, St James, yesterday.
1
2

Despite being subjected to searches at the various police-military checkpoints, it was an uneventful first day of the 2017 school year for the students from Mount Salem in St James, which was declared the nation's first zone of special operations (ZOSO) last Friday.

"I don't see it as an inconvenience. I see it as something that is quite necessary," said Valrie Reid, a student of a Montego Bay-based high school. "If we want peace, we have to support the initiative to bring peace, so I have no difficulty with what is happening."

In order to facilitate students without identification who required extra processing, the military provided them with transportation to school to ensure that they were not late. This was lauded by the residents.

"I rather like what the soldiers did for those students. It shows concern and understanding," said Errol Bingham, a resident of the community. "Once they (the security forces) don't come here with brute force, I am sure they will get the cooperation of the residents."

"We are off to an excellent start. The children are coming in. I know one or two might not be here because of uniforms and other things, but I am sure ZOSO has not prevented anyone from coming," said Brown Clarke. "I just want everyone to know that the police and soldiers who are out there are out there to protect them."

She continued, "We thank God that the police and soldiers are out there, even for the children and the teachers to get here safely. The community really needs this. People need to be able to go about their business in a safe way."

Brown Clarke also expressed delight with the part of the initiative announced by Prime Minister Andrew Holness to help needy families in the community with back-to-school assistance.

"We have students and parents with real needs. As you know, we are in the lower socio-economic group, so we have children coming to school without lunch money, books and bus fare, and we have to find ways to help them," the acting principal said.

"Sometimes when children don't come to school and we ask them why they did not come, they will tell you because they did not have any lunch money."

During his press conference on Sunday, following a tour of Mount Salem, the prime minister said a special fund has been established for those who are having challenges with back-to-school expenses, including the cost of identification cards.

"For general back-to-school support, the fund will be allocated based on information provided by guidance counsellors, who will communicate with the zone commander and the social agencies, who will distribute on a needs basis," said Holness. "This is primarily for the schools in proximity of the zone. It will also apply to students who have been identified by the joint forces as not in school."