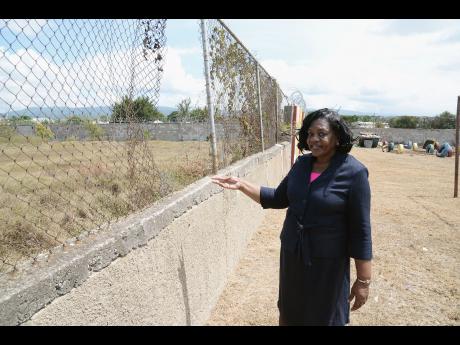 Jermaine Barnaby
Stephany Carter-Brown, principal of Spanish Town Infant, pointing out the school’s biggest problem – the fencing – at the institution in St Catherine on the first day of school, Monday, September 4. 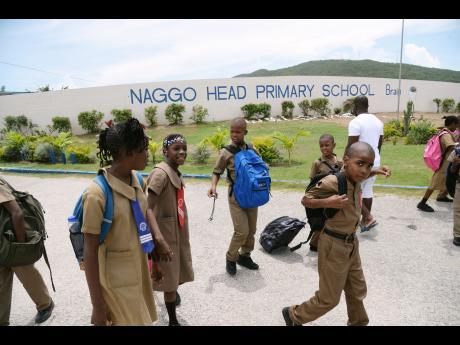 Schools, like churches and hospitals, are institutions to be respected. However, it would appear that is no longer the case as the crime situation worsens across Jamaica.

This is cause to worry for Stephany Carter-Brown, principal of the 99-year-old Spanish Town Infant School, located on Church Street in the Old Capital in St Catherine.

"We are located in the heart of an inner city. Right next door is the infamous De la Vega City. Up the highway is the March Pen Road community, notorious for gun warfare, and there are many other areas surrounding us that are equally volatile," Carter-Brown explained.

She told The Gleaner that for security reasons, it was vital that the Ministry of Education help the school to erect a durable concrete wall that would replace the often-breached chain-linked fences.

The crime situation, she pointed out, is a huge matter for not just teachers but students, who, after hearing gunfire, are often left traumatised.

"It is a real worry for me. Because the little security we have here cannot, under any circumstances, manage to hold off those miscreants coming through here. I can recall one day a father of a child here dropped him off at school but took along his gun for safety," said Carter-Brown.

"This is the reality. Many times we would be in school and a barrage of gunshots would erupt. I would be hiding under my desk; teachers and students would hit the floor prostrate out of fear. We cannot run a school nor have a society functioning in this way."

The principal is begging Minister of Education Ruel Reid to see about the construction of a perimeter wall to safeguard the school and its occupants.

Although not located in an inner city, Naggo Head Primary in Portmore, St Catherine, has much to worry about, even at this early stage of the new school term.

Principal Andria Givans said that she, too, is concerned that the constant shootings near her school could spill over on to the compound, and that it was really important that it be outfitted with a proper perimeter fence.

She noted that the violence has begun taking toll on the school, particularly in how the ancillary staff report to work.

"In time past, my staff would come out very early to clean and open up the school for each day. Now that cannot happen. They are afraid of what could happen to them having to reach here early, in many cases before the sun rises," Givans said.

"If this continues, before long, we may no longer have a school here because the violence is simply increasing."