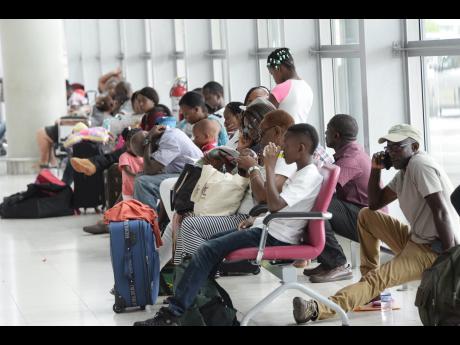 The island's tourism industry received a body blow yesterday as an estimated 8,000 to 10,000 visitors, plus scores of Jamaicans, were unable to enter or leave through the island's two main airports.

Visitor-arrival figures for the first week of this month show 24,402 at the Sangster International Airport and 4,898 at the Norman Manley International.

"That is more than 4,000 arrivals a day, and with an estimated almost equal number of departures, plus the Jamaicans travelling, it means we could have even more than the 10,000 people disrupted," said one north coast hotelier who asked not to be named.

"The only saving grace is that the hurricane (Irma) caused the airports in Miami and Fort Lauderdale to be closed, and a lot of the traffic we would expect comes through these gateways," added the hotelier.

His comments came as local authorities tried to carry out the fix to the system which was shut down following a lightning strike on Friday.

Up to press time the airspace remained closed, and Nari Williams-Singh, director general at the Jamaica Civil Aviation Authority, told The Sunday Gleaner that while some progress was made with restoring equipment, he could not give a definite time as to when normality would return.

"Unfortunately, our team is still continuing with trouble-shooting and rectification so service is not up as yet," Williams-Singh.

"The technical teams are working at it. We are making progress (but) it is slow, because a number of electronic components were involved, and so we have to be meticulous in our troubleshooting and the repairs that we effect," added Williams-Singh.

He said although a lightning protection system is in place, reviews will have to be done to ensure that the facility is fully equipped to deal with similar events in the future.

"The strike was a pretty significant event and so it did quite a bit of damage. We did have lightning protection (but) obviously, we will have to review that. It was quite robust and state-of-the-art, and has worked on previous occasions, but I don't recall us having a direct strike on the building in the past," said Williams-Singh.

At the island's two major airports yesterday, frustrated travellers waited for information despite pleas from the Airport Authority for them to wait until called.

When our news team visited the Norman Manley International Airport yesterday, the frustration was obvious as stranded passengers sought answers.

Delroy and his daughter, Nevaeh Gayle, were among those left stranded, after they were scheduled to leave for New York 11:45 a.m. yesterday.

"My flight was cancelled and from my checks, Monday is booked, Tuesday is booked and Wednesday is booked, so we had to arrange for Thursday. We are waiting on our cousin to come and pick us up now, to take us back to Portland," said Delroy.

His daughter was less understanding as she indicated the impact the delay would have on her return to school.

"I have school so this is a huge delay for me. I think my mother has been speaking with them (school) though. So this means I'll be in Jamaica for another four days," said an obviously disappointed Nevaeh.