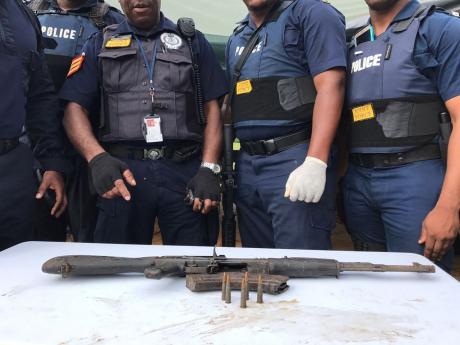 Contributed
A member of the JDF interacts with persons manning one of the booths during the community services fair in Mount Salem, St James, yesterday. 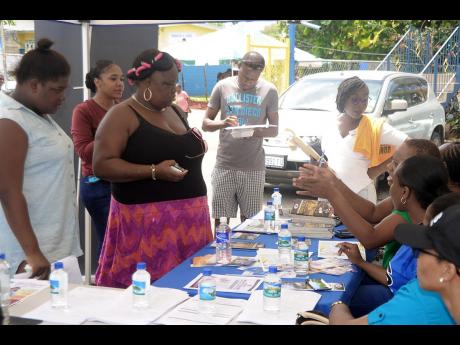 Adrian Frater
Some residents getting information at one of the booths during the community services fair in Mount Salem, St James, yesterday.
1
2
3

An AK-47 rifle with one magazine and five live rounds, a 9mm pistol and two home-made guns were found; two men believed involved in serious crimes held; lead sheets used in the lottery scam seized, and scores of residents turned out for a community services fair, in one of the most successful days since the zone of special operations (ZOSO) was launched in Mount Salem, St James, just over one week ago.

The ZOSO Communications Unit reported that about 7:30 a.m. yesterday a team was conducting operations in the zone, when they searched a premises on Pedlars Lane and found the weapons and the ammunition.

The three other guns were found about 1:15 p.m. yesterday when members of the joint forces conducted a snap raid at a premises on Piggott Street. During the search, a .9mm Sig Sauer was found in a garbage pile, wrapped in a black plastic bag. Two lead sheets used in the illegal lotto scamming trade were also discovered. Minutes later, two home-made handguns were found on the same premises.

In a separate operation, two men were taken into custody. The communications unit said one of the men was wanted for shooting while the other is a suspect in a case of shooting in the area.

"This morning's (Saturday) find is a result of the combined efforts of the ZOSO intelligence-gathering mechanism and the commitment and diligence of the joint forces on the ground," said the communications unit.

In the meantime, residents turned out in large numbers to access the various services on offer on the first day of the two-day zone of special operations fair, which is designed to link them to key government services to secure much-needed items such as birth certificates and IDs.

"We are very encouraged by the turnout, considering that we had to make a late switch from the Mount Salem playing field to the Mount Salem Primary and Junior High because of the inclement weather," said Omar Sweeney, the vice-chairman of the social intervention committee established in the zone.

"The people were out in their numbers from very early, and once we were able to organise them to their respective needs, things have been flowing smoothly," added Sweeney.

There was a hitch, however, as some of the persons who turned out to get the various IDs were not able to secure them because they were not birth certificate holders.

The agencies that were in the zone offering services included the Child Development Agency, the RGD, the Social Development Commission, Jamaica Social Investment Fund and HEART Trust/NTA.

Community stalwart, businessman Errol Lamey, told The Sunday Gleaner that while he has issues with ZOSO, he was pleased with the fair, which he said brought much-needed services to many persons, who were perhaps too lazy to go out and access them.

"This part of the ZOSO is very good and I believe that it is something that should be applauded," said Lamey.

In pointing to the aspects of the operation that he was not pleased with, Lamey said it appears that the first ZOSO was designed more to drive the criminals out of the community rather than seeking to apprehend them.

He argued that the people who are now being inconvenienced by ZOSO are the law-abiding ones, as the criminals have fled.

"I don't believe in chasing them out and not apprehending them because sooner or later they will come back and the cycle will start all over again," said Lamey. "As we speak, the residents who are being inconvenienced are the good, law-abiding folks because the criminals have taken flight," charged Lamey.