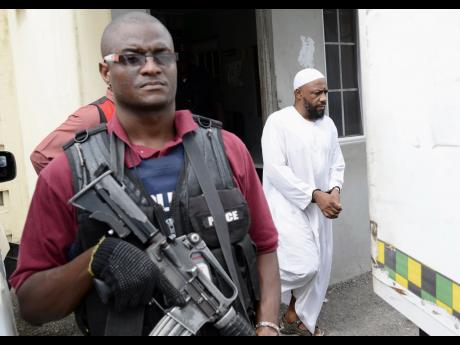 Muslim Sheikh Abdullah el-Faisal who is wanted in the United States on terrorism-related charges, was denied bail when he appeared before the Kingston and St Andrew Parish Court yesterday.

Parish Court Judge, Broderick Smith, in denying el-Faisal bail said that he was associated with a group that could properly be described as radical. He said el-Faisal could be a flight risk and there was no guarantee he would not engage in the alleged offence while on bail.

El-Faisal's attorney KD Knight told reporters that he planned to appeal the denial, before the matter is heard again in court, on October 27.

“One step at a time! The next step is the appellate step. There are well defined ways in which we approach the issue of extradition. The law books are replete with authorities, as to how it is done. This is the first of this kind of request under the anti terrorism legislation.”

“He denies the charges and contends that some of the charges have arisen because of lack of understanding as to how his faith operates, and denied any radical tendencies ... He has publicly made statements which disavow radicalism,” Knight said.

Answering a question from The Gleaner, Knight stated that he has not received the official documents which indicate evidence of Faisal's involvement in recruiting persons to join terrorist group ISIS.

“By official documents I am taking it to be referring to the evidence. We haven’t been served yet. The diplomatic note is (however) an official document. That certainly has arrived. It is on that basis that the arrest was made.”

Al Faisal who was arrested on Friday August 25 by Jamaican police, is being accused trying to convince a United Sates undercover policeman to join the Islamic State (IS) terror group.