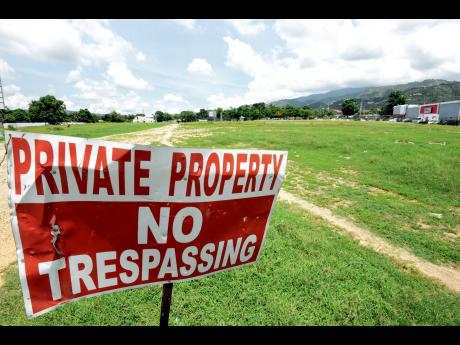 The Kingston and St Andrew Municipal Corporation (KSAMC) has paved the way for the sale of the land that formed the roadway that moved motorists from East King's House Road to Barbican Road.

The KSAMC on Tuesday approved a resolution moved by Winston Ennis, councillor for the Waterloo division, for the sale of 29 East King's House Road to Kenneth Loshusan & Sons Limited and Grant Marketing Company,

Ennis, who was elected on a Jamaica Labour Party ticket, had argued that if the sale is granted, it would accommodate road expansion, which would aid significantly in easing traffic congestion in the Barbican area.

"The traffic will now flow to Hope Road easily when it comes to peak hours in the area - morning and evening. They would have four-lane traffic either way, which would also allow the flow to Grants Pen and Jacks Hill easily," said Ennis.

But Andrew Swaby, councillor for the Vineyard Town division, who was elected on a People's National Party ticket, expressed some concern as he argued that there was need for clarification.

"If I should listen to the mover and the general gist of what it is saying, it is that the sale of this piece of land is for expansion, and if that is so, why are we selling the land to a private entity and not the NWA (National Works Agency)?"

"I would love to have that clarified," said Swaby, a former deputy mayor of Kingston.

His colleague, Dennis Gordon, councillor for the Maxfield Park division, told the meeting that he had issues with the

The sale of the parcel of land is in line with the Barbican Road Improvement Project, which will see the corridor being upgraded from the current two lanes to a four-lane carriageway with a median.

The work is being undertaken as part of the Major Infrastructure Development Programme valued at more than US$300 million, which is being implemented by the China Harbour Engineering Company.