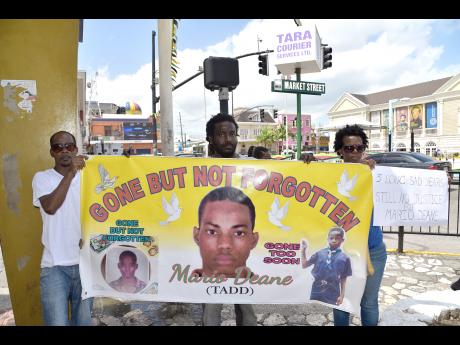 The absence of two of the defence attorneys for the three police officers charged in connection with the 2014 death of Mario Deane resulted in the case, which came up for mention in the St James Parish Court yesterday, being put off until October 3.

"I am told that Mr Thomas is having difficulty with preparing the submissions in the case, and Mr Gayle is not well. They are asking for October 3 as the next court date," Parris said

The attorneys had previously been instructed to prepare written submissions in the case, against the background of ongoing issues with witnesses failing to show up, in order to give evidence. These issues had led to the prosecution electing to close its case.

Stewart, Clevon and Grant are charged with manslaughter, misconduct in a public office, and perverting the course of justice, arising from allegations that they were on duty at the Barnett Street Police Station in Montego Bay where Mario Deane was being held at the time he was badly beaten in a cell on August 3, 2014.

Deane, who was beaten into a state of unconsciousness, died three days after the incident in the Cornwall Regional Hospital, without regaining consciousness.

It is also alleged that Stewart, the most senior of the police trio, gave instructions for the cell, in which the fatal beating took place, to be cleaned before the arrival of investigators from the Independent Commission of Investigations.

The many delays in the case being completed have been a source of much frustration to Mario Deane's mother, Mercia Frazier, who staged a one-woman protest in Sam Sharpe Square on Independence Day to mark both the anniversary of her son's death and to protest the slow pace of justice in Jamaica.