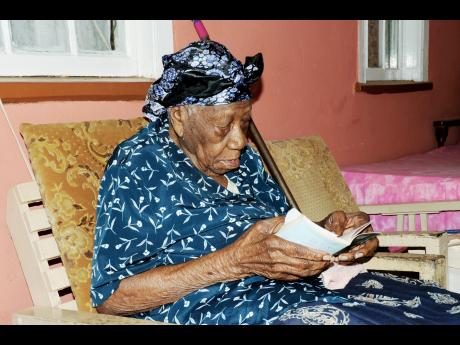 The world's oldest person, 117-year-old Violet Moss Brown, is caught in the middle of a tug of war between members of her family as one group that claimed that she was not getting the best of care has snatched her from her Duanvale, Trelawny home and refuse to say where she is.

The family members with whom she had been living are now in a panic as they are unaware of her whereabouts. They said that she was taken by a relative to keep a medical appointment on Saturday, but she has not been returned to her Trelawny home.

"Karen Samuels (who took Moss Brown to her appointment), told me she was instructed by Barry Russell (Moss Brown's son) to take her to the hospital to get her hydrated," said Christo Davis, Moss Brown's grandson. "She (Samuels) did not take her back, and we, who have been here with her all these years, have no idea where she is now."

When The Gleaner contacted Samuels, she said she was instructed by Russell to remove Brown from her Duanvale home. She said she was further told not to reveal her whereabouts to anyone.

When The Gleaner contacted Russell via telephone at his Miami home, he said that he was not happy about the way in which his mother was being cared for and accused her grandchildren, with whom she had resided, of being greedy and uncaring.

"I made the decision to move my mother because her greedy grandchildren were not taking good care of her," said Russell. "I am not going to reveal her whereabouts to them ... she is alive and well."

However, Lelieth Palmer, the daughter of Moss Brown's son, Harland Fairweather, who was the world's oldest person with a living parent prior to his death earlier this year, told The Gleaner that since her father died, there had been a family dispute as to who should care for Moss Brown.

"Ever since my father died, there has been a family dispute as to who should care for Aunt V (as Moss Brown is affectionately called)," said Palmer. "She was removed because of this dispute."

The decision to remove Moss Brown from her Duanvale home has not gone down well with other members of the community and her church family, who view her as a community icon.

Joy Leach and Morris Palmer, two justices of the peace in the community who would regularly visit with Aunt V, are distraught by her removal from the community and are worried about her well-being.

"We are concerned because we don't believe she is happy," said Leach. "Aunt V is accustomed to having regular visits from the pastor and members of her Baptist Church. She is now with strangers who she knows nothing about."

Palmer is also concerned that her grandmother will miss an appointment with representatives from The Guinness Book of World Records, who are slated to visit her at her Duanvale home.

Since becoming the world's oldest person less than a year ago, Brown has brought much visibility to Duanvale. She has had visits from Governor General Sir Patrick Allen; Prime Minister Andrew Holness; Opposition leader Dr Peter Phillips; and president of Jamaica Baptist Union, Dr Devon Dick.