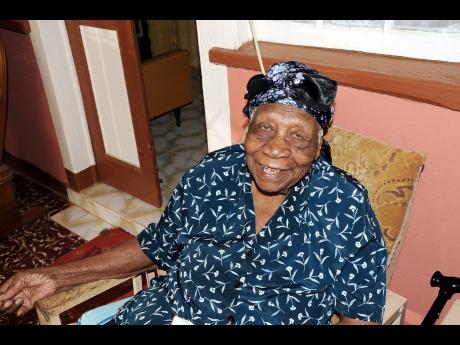 Violet Moss Brown, who had the enviable distinction of being the world's oldest person for just over five months, is dead. She died at a medical facility in Montego Bay, St James, yesterday afternoon, three days after she was controversially removed from her Duanvale home, in Trelawny, where she resided with her grandchildren and other family members.

"She died at the Fairfield Medical Centre, in Montego Bay, at approximately 2:30 p.m.," said her son, Barry Russell, who is based in Miami, Florida. "She was taken to the medical facility on Saturday because she was not feeling well, was dehydrated, and had an irregular heartbeat."

However, other family members, who were unaware of her whereabouts at the time of her death as she was not returned home after the doctor's visit on Saturday, have taken the news of her death very hard and are intimating that she may have died of a broken heart.

"She was in good spirits before she was taken away to see the doctor, she did not appear sick because she was able to sit up and have her hair combed," said Lelieth Palmer, Moss Brown's granddaughter. "Her death has come as a big shock to us."

In a Gleaner exclusive yesterday, it was reported that Moss Brown was taken from her home by a relative, identified as Karen Samuels, on the instruction of Russell, who also advised her not to tell the other family members where she was. When The Gleaner contacted Russell, he explained that the decision was taken because Moss Brown was not being properly cared for by her grandchildren.

"I made the decision to move my mother because her greedy grandchildren were not taking good care of her," Russell told The Gleaner at the time. "I am not going to reveal her whereabouts to them ... she is alive and well."

Russell's action infuriated other members of the family, as well as members of the wider community, who felt it was a big mistake to move her from around the family and friends to whom she was accustomed.

"We are concerned because we don't believe she is happy," Duanvale-based Justice of the Peace, Joy Leach, told The Gleaner on Friday. "Aunt V (the name Moss Brown was affectionately called) is accustomed to having regular visits from the pastor and members of her Baptist Church. She is now with strangers who she knows nothing about."

April 15, 2017 when the Italian super-centenarian, Emma Morano, who was the previous world's oldest person, died, paving the way for the Trelawny woman to enter the Guinness Book of World Records for her longevity, which she credited to eating good food and serving God.

Moss Brown's son, Harland Fairweather, who died earlier this year at age 97, also shared a coveted spot with his mother in the Guinness Book of World Records as he was the world's oldest person with a living parent.