60 days not enough - Stakeholders say time too short for social intervention in ZOSOs; fear it will fail 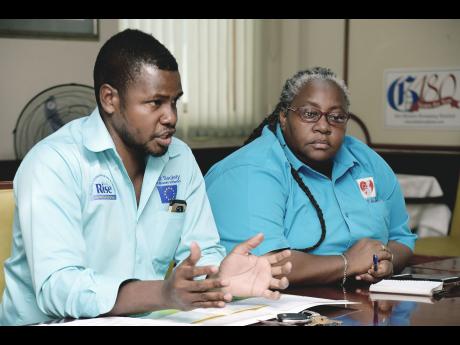 Lionelo Rookwood
Shawn McGregor, programme manager at RISE Life Management Services, makes a point during The Gleaner’s Editors’ Forum at the media house’s Kingston office yesterday. At right is Joy Crawford, co-founder and director of programmes and training at Eve for Life.

Stressing that there is no quick fix for a long-term culture of bad behaviour, civil society stakeholders are adamant that the 60-day time frame set out for the implementation of social intervention programmes within the zones of special operations (ZOSOs) is not enough to bear much fruit.

In fact, representatives from RISE Life Management Services and Eve for Life practically scoffed at not only the impossibility of such a plan, but at the social support and capacity building being proposed under the ZOSOs.

Supporting that view, Joy Crawford, co-founder and director of programmes and training at the non-governmental organisation Eve for Life, argued that social intervention programmes in high-crime communities would only work if they are centred around reversing a culture of unruliness.

"Behaviour change is what is needed if we want to address crime. It is not just about taking in guns. It is to understand why I am even carrying a gun, and after giving you the one I now have, how I then change my thought process so I don't go and find another gun. We need to find out the theories, best practices, and what the models are that other communities have used for behaviour change because the gun does not carry itself. It has a human behind it," she stated.

On September 1, the Government declared its first ZOSO in Mount Salem, Montego Bay, St James, as part of the strategy to arrest the high crime wave sweeping across Jamaica. One element of the initiative is to undertake a comprehensive social intervention programme in each ZOSO, with the hope of reforming that community for the better and not having it revert to criminal activities once the security forces pull out.

Crawford emphasised that the Government's usual excuse of not being able to source funds to support programmes in a long-term, sustainable way was unacceptable.

"We can appreciate the limitations that Governments have, for various reasons, and that is why you must have deliberate engagement of civil society and not one that happens by osmosis or by accident, and then provide the resources to remain. You have to mobilise the communities, and you cannot do that through one or two town hall meetings. Find out who the gatekeepers are. It takes a door-to-door relationship," she pointed out.

"That kind of thing is required to build and transform. But for crime and violence to be addressed, we need to take a behaviour-change approach and not just a security approach. I keep hearing that we don't understand crime in Jamaica, but it is more than just poverty and those kinds of things."

RISE Life's executive director Sonita Abrahams backed up Crawford's point, adding, "When they (the Government) wants to do something, whatever it is, they find the resources. So the resources can be found."