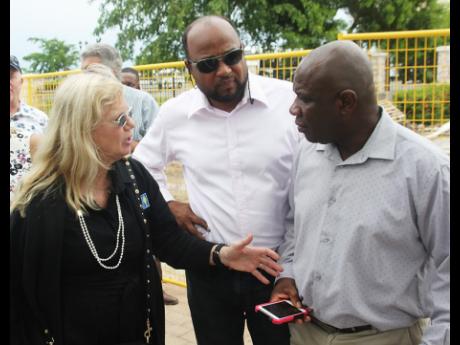 The town of Falmouth in Trelawny, which was on the brink of despair following news that several major cruise ships would be pulling out, looks to be getting an unexpected windfall on account of hurricane damage to other destinations in the region. Sixty-eight cruise ships are now slated to be rerouted to the Falmouth pier.

According to Michael Belnavis, the chairman of Jamaica's National Cruise Council, the vessels, some of which were slated to visit Key West in the United States, will now be heading to Jamaica as several popular ports across the region were devastated by Hurricanes Irma and Maria.

"Sixty-eight ships have been rerouted to Falmouth. This is as a result of hurricane damage to other ports in the Caribbean as well as Key West in Florida," said Belnavis. "Today (Wednesday), the Allure of The Seas, with its 4,000 passengers and 2,000 crew members, is here. Earlier this year, they had decided not to call in Falmouth because of a number of issues, including harassment."

The unforeseen boon for the Port of Falmouth, which became Jamaica's premier cruise ship pier shortly after it opened in 2011, prompted a visit to the town on Wednesday by several key local and overseas players in the cruise sector, among them Michelle Paine from the Florida Caribbean Cruise Association.

"We are here to see what Falmouth has to offer. We know what our clients and prospective ones want, so we came to ensure that what we promote is what they will get," said Paine, who, along with the other industry players, were given a walk through the town by Falmouth's mayor, Councillor Colin Gager.

SYMPATHY FOR OTHER DESTINATIONS

While sympathetic to the other destinations, Gager was quite pleased that Falmouth was able to come to the rescue of the ships that were left without a port. In fact, he is now spearheading efforts to ensure that some of the concerns of the past do not resurface.

"We have improved the area around the pier to cut down on harassment by bus drivers. No longer will they be allowed to park around the pier. Information desks will be placed at convenient places, where guests who need transportation services can go," he said.

"Drivers will be on a roster and they will be called to provide the service as needed. No more will drivers interact directly with passengers around the pier."

Another concern that Gager has moved to address is the unsightly stalls in proximity of the pier, which many persons consider an eyesore.

"The craft traders and their unsightly blue tarpaulins have been removed from the sanitary convenience compound and placed in a temporary area, where they will stay until the market, which is being constructed by the Port Authority of Jamaica, is completed at the end of October," he said.

In July, a pall of gloom descended on Falmouth when it was announced that the Allure of The Seas and Celebrity were among three ships, operating under the Royal Caribbean umbrella, that had decided to pull out because of tourist harassment, among other issues.