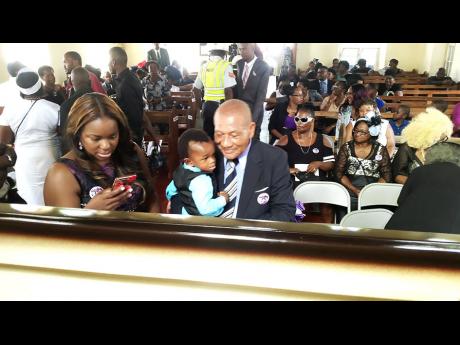 Contributed
Barry Russell, the son Of Violet ‘Aunt V’ Moss Brown holds one of her great-great-grandson, while a female relative take takes a picture of her body during the thanksgiving service for her life yesterday.

Barry Russell, the son of Violet 'Aunt V' Moss Brown, used the thanksgiving service for her life at the Trittonville Baptist Church in Duanvale, Trelawny, yesterday to launch a scathing attack on the media and residents of Duanvale as the controversy surrounding the once world's oldest person continued.

"Since I have come home since her death, the media has printed nothing but negatives. I demand justice. All of the people who are disputing my decision to donate her body to science and not to bury it for corruption, all of you are protesting only for white rum and chicken back. You brains are nothing compared to hers, which lasted 117 years," said Russell in what should have been a tribute to his late mother.

His comments did not go down well with members of the Duanvale community, who became boisterous and started to protest loudly in the church and under a tent which was set up in the churchyard to accommodate the scores of persons who had come to pay their last respects to Aunt V.

The Reverend Harrif Allison, who was leading the service, urged the congregation to be quiet, but it took a short break from the programme during which several choruses were sung to restore normality.

Minister of Culture and Gender Affairs Olivia 'Babsy' Grange, who was in the audience, appealed to the residents of Duanvale to do nothing to destroy the memory of the woman who put the community on the world stage, when she was officially recognised as the oldest living person.

"Make her proud, make Jamaica proud. I will ensure that a special monument be established in her memory," said Grange.

The body of Aunt V, who died at age 117, has been controversially donated to the University of the West Indies for scientific research.

It will be handed over tomorrow to the Department of Anatomy and Physiology at the university.