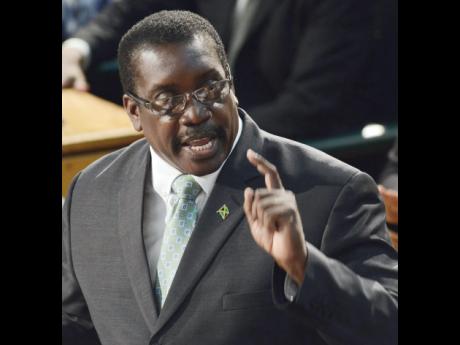 Crime does not pay, but it certainly is costing the Government of Jamaica a tidy sum, amounting to $68 billion per year, a dollar figure the National Security Minister Robert Montague says could fund the construction of 16 new schools.

Addressing the first Jamaica Geographic Information System (GIS) User Conference on Tuesday, Montague cited ministry data, revealing the monetary impact that the high levels of crime have been having on Jamaica's fiscal space.

"Crime is costing us a lot of money in this country. It is estimated by the World Bank that crime is costing Jamaica five per cent of GDP per year, which translates to about $68 billion per year," said Montague.

"So if you do the math, it gives you an idea of the cost of crime in Jamaica and how it affects you, because as much as the prime minister and the minister of finance gave back to our public servants the $1.5 million tax free, that money is being sucked by the persons who [are] in our hospitals," stated Montague.

"So even if you are not a victim of crime, you are also paying for the cost of crime in this country," Montague added.

Juxtaposing the value of crime against what he said was much needed national infrastructure development, the security minister said that in reality, the $68 billion could fund the construction of 16 high schools in addition to 30 new hospitals.

"We could build some 30 hospitals, furnish them and staff them. We could upgrade and put barber-green on 100 of our Grade A roads in Jamaica, and everyone of us knows what that means," he reasoned.

"We could repair every clinic and every school and have money left over. We could repair and furnish every government office. That is the cost of crime not only to the country, but to every single one of us," Montague said.

The two-day Jamaica GIS User Conference was hosted by the National Spatial Data Management Division, an agency of the Ministry of Economic Growth and Job Creation, under the theme 'Geospatial Technologies: Mapping Our Way to Secure Communities'.