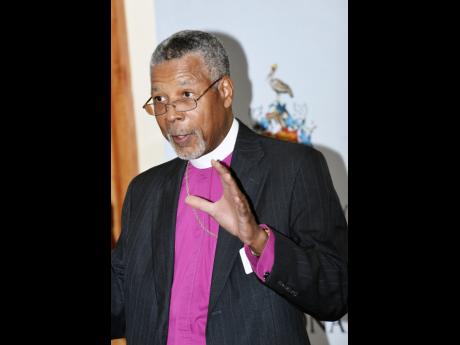 Norman Grindley
Most Rev Dr John Holder, Archbishop of the West Indies, at the 'Intimate Conviction' international conference examining the church and anti-sodomy laws across the Commonwealth, yesterday. The conference is taking place at the University of the West Indies Regional Headquarters in St Andrew. 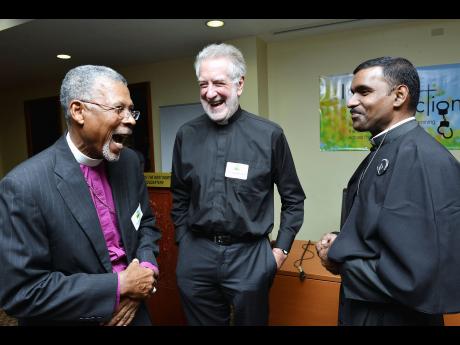 Anglican Archbishop for the West Indies the Rev Dr John Holder says that there is no biblical basis for the support of the sodomy law by some who use religion as a platform to deny others their individual rights.

Holder said at yesterday's start of the Intimate Conviction International Conference in Kingston that the use of Sodom and Gomorrah, the main scriptural reference for people opposed to the gay lifestyle, is fraught with the danger of imposing our convictions and understanding, prejudices, biases, and bigotry about this story when it is not there.

"My argument is that using the story of Sodom and Gomorrah to support the sodomy law has no basis, none whatsoever," Holder said.

Citing scripture after scripture in his attempt to explain the Bible's take on the controversial, and still criminal, offence in Jamaica and elsewhere in the Commonwealth, Holder said that the practice of homosexuality has long been part of the human sexual experience, predating the modern concepts of sexuality.

He said that the Bible has been used as a tool to condemn people of differing sexual orientations and as a tool to retain the laws against same-sex unions 50 years after said law was repealed in England and Wales.

"As soon as the word homosexuality is mentioned in biblical studies, they want to make a beeline straight to the Sodom and Gomorrah story. Here is one of the favourite hunting grounds for those who want to use the Bible to condemn homosexual behaviour and find support for the retention of the sodomy law," said Holder.

Using the Book of Ruth, chapters three and four as examples, Holder explained that it was instructive that the writer in this case "did not use one word condemning Ruth's behaviour after she was persuaded by her mother-in-law, Naomi, to seduce Boaz, the King".

"All this leaves us with the story that has been used as a platform for the rejection of another non-traditional sexual relationship, homosexuality," he continued.

Lord Anthony Gifford, Queen's Council and human rights lawyer, got straight to the point in asking for a referendum.

"Let the people decide by way of a referendum," he said.

"In the open and democratic society contemplated by the Constitution, there must be mutual, respectful coexistence between the secular and the sacred. The function of the court is to recognise the sphere in which each inhabits, not to force the one into the sphere of the other," Gifford said.

'They cannot speak for Christianity'

President of the Jamaica Evangelical Alliance Bishop Alvin Bailey, who, on Tuesday, distanced himself from the conference of church leaders, on the anti-buggery law, told The Gleaner yesterday that there seems to be a clear modus operandi among some to quickly have the law repealed.

"They are individuals that at best, are intellectual apostates - persons who are allowed to own their own views on matters but who do not speak for their denominations. They cannot speak for Christianity. They are inauthentic as it relates to biblical references," he said.

"Their aim is the decriminalising of buggery. It is their last bastion of hope to legalise homosexuality, and we will continue dissociating ourselves from them and their stance," Bailey added.

He questioned the context of the archbishop's understanding of the Sodom and Gomorrah story.

Bailey said that even if Sodom and Gomorrah were destroyed without any reference to homosexuality, the Bible does speak explicitly against the practice in other texts.

"This is the kind of irrationality of the argument that these persons are presenting why I think they cannot speak fully for their denominations and the wider Christian community," said Bailey.