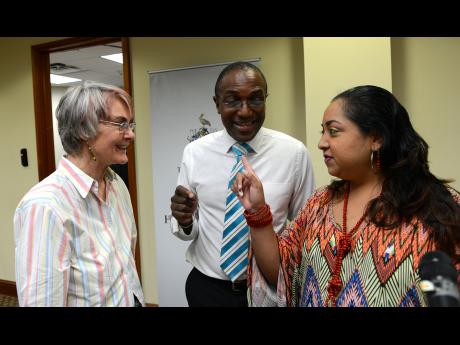 Ricardo Makyn
Philippa Drew (left) of the Kaleidoscope Trust; along with Maurice Tomlinson, senior policy analyst, Canadian HIV/AIDS Legal Network; and Yolanda Paul, a facilitator at the Intimate Conviction conference, at the University of the West Indies, yesterday.

Jamaica has been given high marks for its effort in striving to meet the United Nations Programme HIV/AIDS Fast Track Progress target, a useful analysis that seeks to end the AIDS epidemic as a public health threat by the year 2030.

UNAIDS Rights, Gender, and Mobilisation Adviser Dr Nkhensani Mathabathe told The Gleaner that all indications suggest that Jamaica is making significant strides in the area of cauterising the spread of the HIV/AIDS epidemic.

"Jamaica, being a signatory to the agreement, is working towards attaining that goal and continues to show improvement along all measurements. However, there are certain areas in which Jamaica can do better," she said.

Mathabathe noted that in the area of treatment, a lot more can be done, especially through a targeted framework dubbed the "Ninety, Ninety, Ninety" principle.

She was speaking on the sidelines of the two-day Intimate Conviction International Conference yesterday in Kingston, which sought to examine the Church and anti-sodomy laws across the Commonwealth.

Jamaica was rated high on the stigma index, an instrument that measures the levels of stigma in a community, implemented in 2013.

This index records the experience of persons living with HIV and how they have been treated in certain settings, including the workplace and wherever they interact with others at the social level.

"So stigma and discrimination is one of the challenges that is blocking the progress that we want to see in the Jamaica AIDS response, but we are still impressed with what we are seeing," said Mathabathe.

And while the Caribbean continues to have the second -highest HIV prevalence rate after Sub-Saharan Africa, many stakeholders involved in the regional HIV response have identified the region's anti-sodomy laws as contributing factors to these statistics.