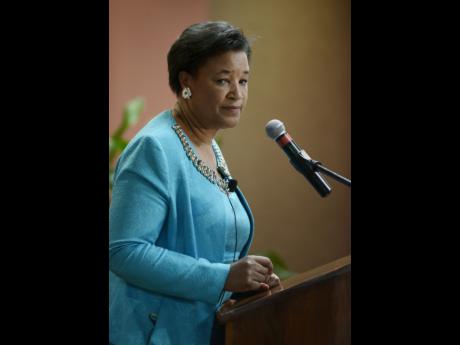 Jamaica’s ailing justice system could be given a lifeline when the Commonwealth Secretariat unveils a package of legislative reform tools following a meeting of the groups’ law ministers in Nassau, Bahamas, which ends today.

“We are all, 52 countries, based on common law principle, and we are all faced with serious challenges,” Scotland told The Gleaner in an exclusive interview from The Bahamas.

“Each of our countries are facing similar problems and difficulties as we strive to deliver on the Sustainable Development Goals (SDG) agenda which was set in 2015 in New York but was also agreed to by all the Commonwealth countries in 2013,” said Scotland as she pointed to the Commonwealth Charter which has partnership as its main theme.

She said Commonwealth law ministers have used the conference to share good practices, what works, what doesn’t work, and how to use the emerging technology to advance the rule of law while simplifying the manual procedures and boosting accuracy in criminal investigations and forensics.

With Jamaica facing a backlog of approximately 35,000 cases in the parish courts and 861 cases before the circuit courts for serious offences such as murders, shootings and rapes, Scotland said the entire Commonwealth is doing a lot to help each other save time, save money and hopefully save lives.

“All of us are struggling with the fiscal realities of where we are now, where no country that I have spoken to has as much money as it would like to have to spend on the legal structure and implementation. So the idea is that if we can come together we can go a lot further and faster,” said Scotland.

She noted that the Commonwealth has long provided core assistance to offices of attorneys-general in the areas of legislative drafting, law revision, and law reform and legislative reform tools will guide lawyers and policy-makers through the law reform process and provide practical advice on approaches to legislation drafting.

The Commonwealth Law Ministers Meeting was held under the theme ‘Strengthening the Rule of Law Through Technology’.