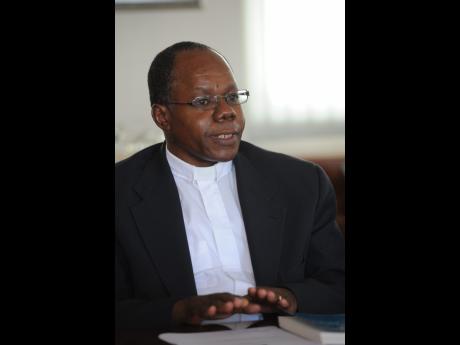 He is accustomed to hearing the Jamaica AIDS Support for Life (JASL) being referred to as a gay lobby group, but Anglican priest and chairman of the board of directors for the human rights organisation, Canon Garth Minott, said, like Jesus, they are simply embracing diversity.

"Any church man, woman, boy, child, leader, follower who takes the life of Jesus seriously would come at it from a different perspective because certainly the Jesus who represents the core persons in the faith, is a person who dealt with differences of gender, age, sexual orientation etc," he told editors and reporters during a Gleaner Editors' forum at the newspaper's North Street headquarters on Thursday.

He pointed to the woman in the Bible who was caught in adultery and was almost stoned to death until Jesus stepped in. While the law required that she be stoned, Jesus took into consideration other factors.

"So the more I read about Jesus and think about his life, the more I see him embracing diversity, embracing difference and in particular embracing those who are on the margins of society. There is a critical mass of the one per cent that are usually left out in society and those of us who follow Jesus knows that he is very much with them and we can't leave them alone," he said.

The JASL is a non-governmental organisation that provides HIV education, treatment, care and support to persons living with or affected by HIV/AIDS, and persons vulnerable to HIV infection. Among its target population are men who have sex with men and the transgender community.

Given the work of the organisation, Minott who is a lecturer at the United Theological College of the West Indies, admitted that the group has often been accused of trying to normalise homosexuality in Jamaica.

"It (JASL) has been called all kinds of name," he said.

"Anybody who stands up for anything, of course you are going to be called all kinds of names, but the key is that the evidence suggests that we are doing work and the data is there to substantiate what we do," he asserted.