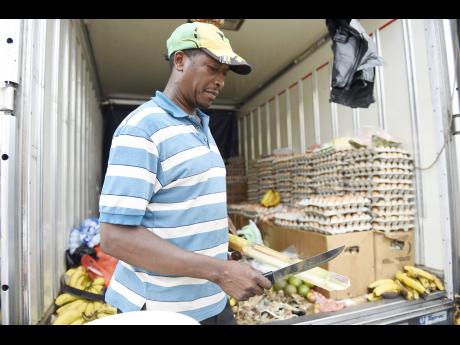 Gladstone Taylor
Lascelle, a vendor in the Coronation Market in downtown Kingston, is among those welcoming ZOSO on their doorstep. 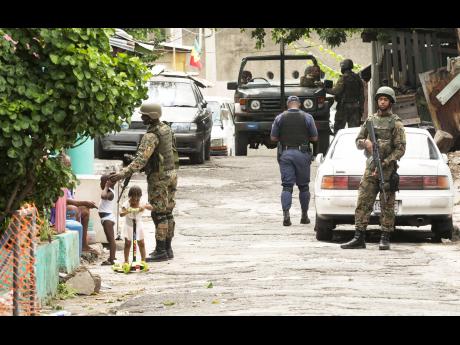 Gladstone Taylor
Members of the security forces on operation in the island’s second zone of special operations, Denham Town, yesterday.
1
2

Vendors in the Coronation Market in downtown Kingston reported sales being slow yesterday, the first big market day since Denham Town, which is just metres away, was declared the second zone of special operations (ZOSO).

But despite the negative impact on their livelihood, some vendors said it is a price they were willing to pay for the peace of mind of operating in a safer environment.

"Things a bit slower than usual, but the people who come buy a buy and don't have to fret," said Tony, who was selling sweet potatoes, carrots and June plums.

"Plenty Saturdays I have been here and have to get flat because shots a fire, so they (security force) just need to take the guns off the road," added Tony.

The west Kingston community of Denham Town was deemed to have met the first-order criteria to be declared a ZOSO, which is ongoing gang warfare, rampant criminality, escalating violence and murder, all of which at times spilt over into the market.

"From 2010 things have been really bad with the violence and market people use to get robbed a lot; especially in the nights," said Joly Wright, who operates a wholesale on the outskirts of the zone.

"So I hope it (the special operation) is going to make the place better, so people can get back the confidence to come in the market and shop."

Lascelles, who peddles eggs and cane in the market, said he had been the victim of robberies on a number of occasions so he was very pleased with the calm the zone has brought to the area.

"Who never used to come rob used to come beg and I had to be selling in fear," said Lascelles. "So although things (sales) have slowed a bit it is worth it."

Maxine, who travels from Manchester to sell ground produce in the market, is hoping that the zone will be in place forever, as she said the area feels a lot safer and she believes the buyers will eventually feel safer too.

The sentiments of some of the businesses operators within Denham Town differed from the higglers as they complained that the curfew, which has been in effect since the area was declared a ZOSO on Tuesday, has led to loss of revenue.

"We are not against the zone because it is doing good for us, but they can give us until nine o'clock to lock so we can catch little sales," argued Herman Dujoy.