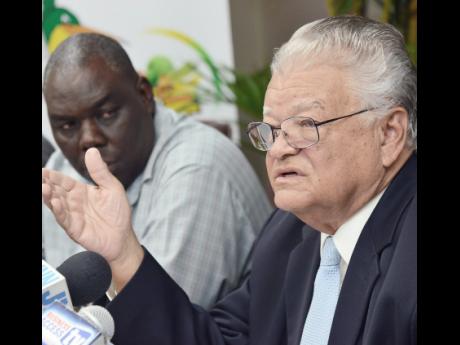 The Ministry of Industry, Commerce, Agriculture and Fisheries has announced that steps are being taken to promulgate new regulations concerning the blending of coffee in Jamaica.

According to the ministry, under these regulations, no imported coffee shall be processed, roasted or packaged for sale in its pure form without a minimum percentage of locally produced coffee.

The ministry said this initiative is intended to give support to the development and expansion of locally grown coffee of all categories.

According to Agriculture Minister Karl Samuda, this regulation will come into effect no later than November 15.

News of the planned change in the regulations came yesterday, days after Samuda told The Gleaner that the dim prospect of the local coffee industry could be turned around if certain changes are made.

He said then that the Government is willing to cooperate and work closely with the farmers, and will offer the necessary protection from a legislative point of view.

"There has to be certain changes made in the industry, we have to take the appropriate measures to ensure that we encourage the development and the expansion of the High Mountain and Low Land coffee, to use as High Mountain and Low Land by itself, and also to mix and blend the Blue Mountain, so that the entire end product is Jamaican," said Samuda.

He has also pledged $80 million from the Productivity Incentive Programme for coffee farmers towards the purchase of inputs such as fertilisers and fungicides, in order to increase their level of productivity.