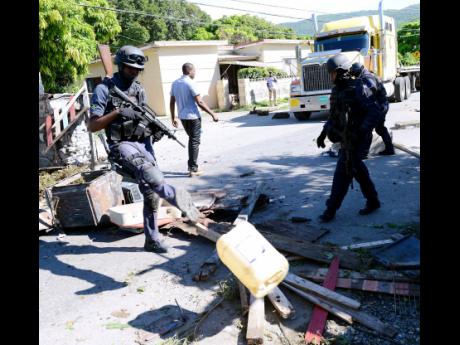 For the second consecutive day, large sections St Thomas came to a halt as residents continued their protest over the poor road conditions in the parish.

The police had cleared the major roadways by late yesterday afternoon, but ominous warnings came from residents that the blockades could be remounted today despite indications from the cops that they have additional resources in the parish to prevent this.

Yesterday, several schools were again forced to suspend classes, business places were shuttered, commuters stranded, health facilities put under pressure and police personnel, including scores summoned from the Mobile Reserve, forced to work overtime, as scores of blockades were mounted.

Protesters used metal, large stones, worn tyres and old appliances to obstruct main roads, setting the blockades on fire at some locations. Some residents cut down trees to prevent the free flow of traffic.

In one instance, four of five people travelling in a motor car on the Arcadia main road had to be taken to the hospital after a tree fell on the vehicle in which they were travelling.

SORRY BUT IN NEED

"I'm only sorry that the tree go down on the car and that them have to end up a hospital, but I am supporting the blockage of the road because we in St Thomas, they don't remember us unless we do certain things. A bet dem remember wi now," said one woman who witnessed the incident.

In the western end of the parish, scores of residents aired their frustration with the state of the roads in the parish they call home.

Orane McNeish, also known as DJ Energy of Knightsville, was one of the most vocal protesters.

"We need a better St Thomas. We want more development in the place. When mi a little boy a go primary school, couple of the factories did open. Right now, everything lock down, no factory no open and no work fi the yout dem," said McNeish, as he echoed the call for better roads.

The anger of the protesters increased as news spread that Omar Ryan and Andrew Turner, alleged organisers of the protest, were still in custody, having been detained by the police on Monday for their alleged role in the blocking of the roads.

Up to press time, the two were still being questioned by the police.

General Secretary of the Jamaica Labour Party (JLP), Dr Horace Chang, has pledged that the roads in St Thomas will be repaired next year.

Responding to the two-day-long protest, Chang said the JLP would hold the People's National Party (PNP) responsible for the damage to public property, loss of income and school time, as well as injuries to innocent Jamaicans caught up in protest.

He said the challenges faced by many Jamaicans was due to road damage caused by historical neglect and recent rains.

"The St Thomas road will be fixed next year by the JLP Government, as was announced. So, too, will many roads across the island under the MIDP (Major Infrastructure Development Programme). It is irresponsible for political operatives to be trying to shut down parts of the country for their narrow political aims when they know solutions have been announced and are to be implemented soon," said Chang.

"People have a right to protest, but such protests should not interfere with the business and lives of other Jamaicans. That we cannot support," added Chang.