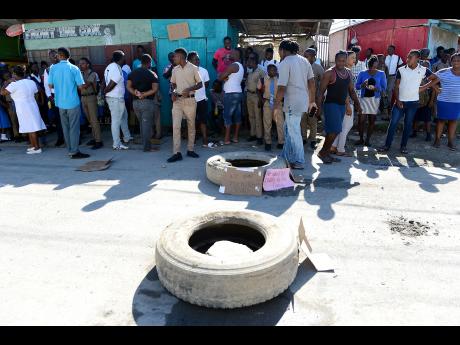 Ricardo Makyn
Residents of Poor Man's Corner, St Thomas, look on at a blockade on the main road yesterday,

The People's National Party (PNP) has rejected claims by Jamaica Labour Party General Secretary Dr Horace Chang that it is responsible for the fiery protests in St Thomas over the past two days.

"The response by JLP's general secretary to the protests by Jamaicans over the condition of the road network across the island is silly and quite laughable," said Julian Robinson, general secretary of the PNP.

According to Robinson, the party supports the right of Jamaicans to engage in peaceful protests, but at no time organised any of the roadblocks and demonstrations now taking place across several parishes.

"Dr Chang should not confuse or make light of this spontaneous move of the people demanding action from an elected government over the obvious deterioration of the road network and the persistent non-response from central or local authorities," added Robinson.

He said that instead of trying to blame the PNP, it would be better for Chang, as a minister in the responsible ministry, to tell the protesters when their roads will be repaired.

"The people have no more patience for another series of empty promises, not after the wanton spending of public funds and allocation of resources in the recent by-election in South East St Mary.

"The JLP general secretary should be totally ashamed of his Government's performance in infrastructure maintenance and development. Every project now under way is a direct result of the MIDP (Major Infrastructure Development Programme), which was developed and financed under the PNP government," declared Robinson.