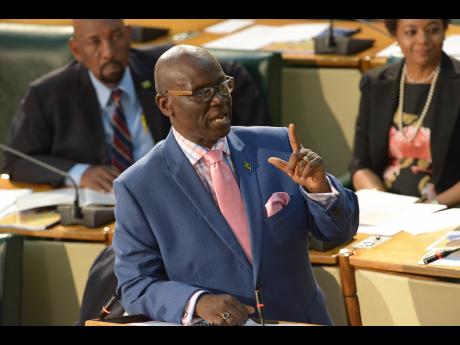 Local Government Minister Desmond McKenzie yesterday responded with anger to the decision of the Hanover Municipal Corporation to bar media access to its committee meetings.

The Hanover Municipal Corporation on Tuesday blocked the media from a meeting of its Physical Planning, Environment, and Development Committee based on what it said were concerns about a Gleaner story out of its September meeting.

At that meeting, some councillors raised concerns about an unbearable stench that they claimed was coming from the Grand Palladium, Lady Hamilton Hotel, in the parish.

On Tuesday when The Gleaner's reporter turned up to cover the meeting, he was summoned to the office of chief executive officer David Gardner and told that he would not be allowed to enter because of the repercussions from the story.

Not for public consumption

"As a result of issues published out of our last Physical Planning, Environment, and Development meeting, the council is of the view that coverage of these meetings will not be allowed until further notice," said Gardner.

"In the judgement of the council, the matter (of the stench) was not yet ready for public consumption as it was a matter under discussion. Our councillors sometimes say things out of context, that should not be said in a meeting, and sometimes they do not realise the implications of the things they say," added Gardner.

But yesterday, McKenzie made it clear that this was unacceptable.

"I want to make it clear that there are only two committee meetings to which public access, and, therefore, media access, is normally restricted. These are the Human Resources Committee and the Poor Relief Committee. Every other committee is open to the media.

"In other words, the meeting of the Physical Planning, Environment, and Development Committee must be exposed to the presence of the media and to the public. I have, since the publication of the story, spoken with the mayor and the CEO and instructed that the media ban is to be reversed immediately," said McKenzie.

The Government is committed to press freedom, Local Government Minister Desmond McKenzie said yesterday. He charged that "political actors at all levels will have to recognise this as a matter of policy".

"If there are issues where councillors say inappropriate things in meetings, those issues cannot be resolved by banning the media," McKenzie said. "It is the councillors who have to regulate their behaviour and raise the level of discourse in the corporations to the point where all can admire the quality of the exchanges and the decisions that emerge from them," added McKenzie.