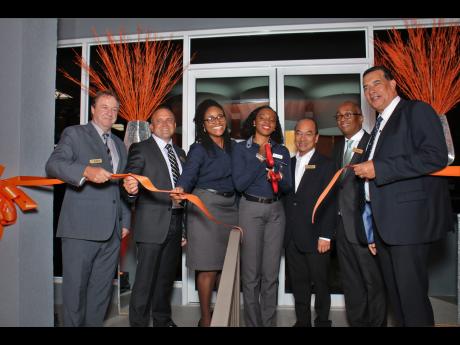 Mayor of Montego Bay Councillor Homer Davis is on a drive to lure potential investors to the tourism capital.

"We at the St James Municipal Corporation stand ready to play a leading role in facilitating investments in the Second City," Davis said during the grand opening of the Ashley Furniture HomeStore, in Fairview, Montego Bay, on Wednesday evening.

This is the second Ashley store to be opened in Jamaica and the third in the Caribbean under the Unicomer brand.

Davis said that his conviction was based on the high business confidence that currently existed across the parish of St James. Despite its many challenges, he argued that Montego Bay remained one of the most attractive destinations for investors and was also the hub of commerce in the Caribbean.

"The opening of this store will not only bring new clientele to the city, but will bring wealth to our people through the very attractive jobs being filled," the mayor said.

His enthusiasm, he admitted, was influenced by calls made by Prime Minister Andrew Holness, who as recently as last week, urged new investors who may be sitting on the fence to inject more life into the economy. This latest addition to the business landscape, the mayor said, would help in driving the process.

"Quality products, style, and outstanding customer service have been hallmarks of Ashley since its founding in 1945. We know consumers in and around the environs will enjoy the quality, style, and selection of Ashley Furniture and be delighted to see our fresh, exclusive product that fits today's lifestyles," Harris told the gathering.

Steel, in his address, credited the brand's growth across the Caribbean to the group's commitment to provide the very best in products and services to its customers.

"We are driven by innovation, customer centricity, and development of our employees and the communities within which we operate. We also seek to partner with companies that are willing to join with us in improving the retail experience for our customers," he said.

There are more than 625 Ashley Furniture HomeStore locations worldwide.