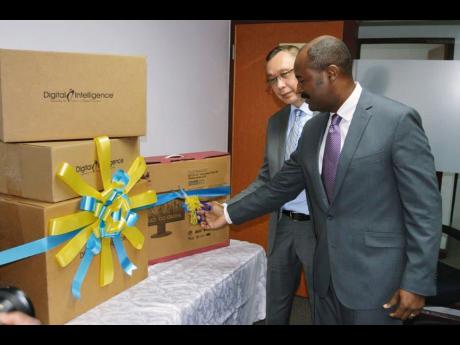 Forensic recovery of evidence data centre devices that can extract data from computers and smartphones, along with other critical pieces of equipment to aid in the fight against corruption, were yesterday handed over to the Office of the Contractor General (OCG) by the United States Embassy.

The equipment, valued at a little more than $17 million, will boost the capacity of the corruption oversight body to more effectively police the procurement process in the public sector to ensure that it is free from corruption.

It was donated by the Department of State, Bureau for International Narcotics and Law Enforcement Affairs in the United States.

Contractor General Dirk Harrison, who accepted the equipment from Eric Khant, United States chargÈ d'affaires to Jamaica, said that the donation would assist the OCG and its successor, the Integrity Commission, to reach and maintain international best practices as "we investigate acts of impropriety and perceived acts of corruption".

In his comments at the handover ceremony, held at the OCG's offices on Oxford Road in Kingston, Harrison said that the forensic recovery of evidence data centre equipment would enhance the overall information and communication technology capacity of the office and its investigative function.

He said that the OCG and the new dispensation of the Integrity Commission must be equipped and well oiled and capable of being a step ahead, if not always alongside, those persons being investigated and monitored.

The OCG boss said that in the last 10 months, investigators from his office had been trained overseas to enhance their investigative capabilities.

Dirk Harrison, contractor general, has asserted that there are perceived and actual issues that have caused gaps and shortcomings in the justice system.

"It is ultimately very important that all stakeholders in the justice system keep abreast of international best practices and hone their skills to plug the perceived and actual issues," said the contractor general. The issues perpetuate what he described as prosecutorial fallacy.

Highlighting the negative impact of corruption on economic growth and prosperity, Eric Khant, United States chargÈ d'affaires to Jamaica, said that if the problem is not cauterised, it could spread quickly like a cancer.

He said that the US Government has spent approximately $9.2 million in the last five years in Jamaica to fight corruption.