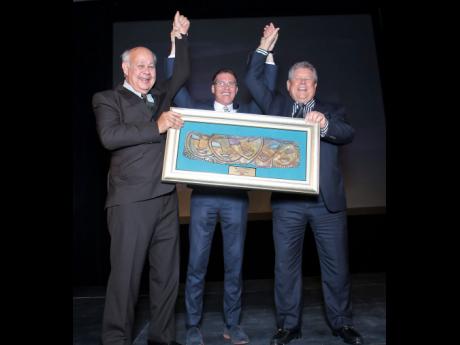 It was a night of glamour, where fine food and exciting entertainment accompanied accolades bestowed on those recognised for excellence in tourism, at the RJRGLEANER Hospitality Jamaica Awards, held at the Montego Bay Convention Centre, on Saturday night.

With more than 120,000 votes polled, selecting all but two of the 19 prestigious awards up for grabs, it was an anxious wait to see who would come out on top in their categories. The formalities got under way with entertainment from the Afro-Caribbean movement Children of the Drums; contortionist Akino; and local R&B group Khalil, with a Motown show.

Five new categories were introduced for this year's awards, and like it has been in the past, Royalton White Sands proved a force to be reckoned with, copping Jamaica's Best Family Resort and the Best All-Inclusive Hotel with over 300 rooms awards.

PERSONALITY OF THE YEAR AWARD

The toast of the evening was hotel mogul Gordon 'Butch' Stewart, chairman and founder of Sandals Resorts International, who was honoured with the inaugural

Stewart, who was presented with the prestigious award by Oliver Clarke, deputy chairman of the RJRGLEANER Communications Group, lauded the organisers, while dedicating the award to his family and his more than 14,000 members of staff across the seven locations in the region.