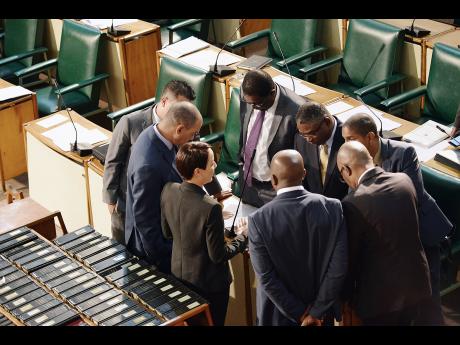 Jamaica will have its National Identification System (NIDS) after all. Hot-tempered exchanges and unkind comments by senators marred the afternoon session of yesterday's Senate deliberations on the NIDS Bill in the Upper House. However the contentious legislation was passed with 168 amendments at 9:13 p.m.

The Opposition voted against the bill.

Section 41 of the bill requires that, "A public body shall require that a registered individual submit the National Identification Number (NIN) assigned to him or the National Identification Card (NIC) issued to him to facilitate the delivery to him of goods or services provided by the public body and the registered individual shall comply with the request ... ."

Opposition senators considered the section to be an overreach, saying it was impractical to deny service to a child born overseas of Jamaican parents days after arrival in the island but who has no NIDS identification.

Senator Floyd Morris sought to ascertain if children would be denied access to primary education in schools if they did not present with a NIDS ID.

Senator Damion Crawford said it would be against their constitutional rights to be denied an education.

However, Senator Kamina Johnson Smith, the leader of government business in the Senate, said it was not now a requirement for children to provide identification before they are provided goods and services.

As a result, the proposal by the Opposition that the provision of the clause be reworded was denied.

However it was on subsection two that tempers flared, especially as the spirited deliberations saw senators go beyond the 4:20 stipulated time without moving a motion to allow the sitting to go beyond that time.

That section reads: "A private-sector entity may require that a registered individual submit the National identification Number assigned to him or the National Identification Card issued to him to facilitate the delivery to him of goods and services provided by the private-sector entity and the registered individual shall comply with the request ... ."

During deliberations on sections three and four, tempers flared. Opposition senator K.D. Knight referenced the activities as a "kangaroo Senate" after Senator Lambert Brown was denied an opportunity to speak to the motion seeking to allow the sitting to go beyond the 4:20 time.

"I know when I leave my yard I don't come here to preside over any kangaroo Senate," Tavares-Finson said.

Knight would later apologise, saying he was forced to make such a comparison.

Finson would also find himself apologising, as he said it was pointed out to him that he "hissed his teeth or kissed his teeth" during the sitting.

Earlier, senators locked horns over who should bear the cost of replacing the card if it became damaged by an entity to which it was presented upon request, or if it was not deliberately destroyed by a holder.

A proposed resolution on a solution was presented by Johnson Smith and it was accepted.