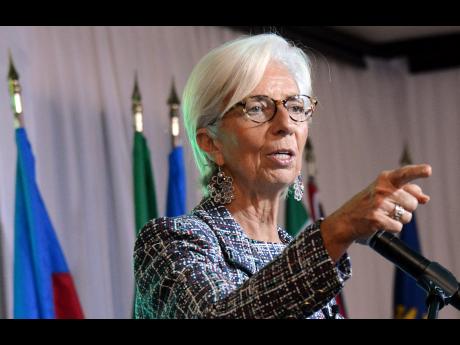 Youth unemployment in the Caribbean is said to be the highest in the world, and crime, partly fuelled by this high rate of joblessness, is a major obstacle to economic growth in the region, according to Christine Lagarde, managing director of the International Monetary Fund (IMF).

The IMF boss, who addressed the sixth High Level Caribbean Forum, held yesterday at The Jamaica Pegasus hotel in Kingston, said that crime imposed several economic costs such as public spending on security and the criminal justice system, as well as private spending on security. She also highlighted social costs arising from the loss of income owing to victimisation and incarceration.

Lagarde said that a study done by the Inter-American Development Bank showed that crime in the Caribbean costs four per cent of GDP per year, which is higher than in Latin American countries.

"We need to create a virtuous instead of a vicious cycle, where strong growth would reduce unemployment, particularly youth unemployment and crime, which, in turn, would contribute to boosting productivity and growth and improve the business friendly environment without which investors are reluctant to invest."

The IMF managing director acknowledged the efforts of various governments across the region to achieve macroeconomic stability and fiscal targets but noted that meaningful economic growth continued to elude them.

However, she argued that there was no single explanation as to why growth is still lagging behind in the region despite the efforts that have been undertaken.

She said that external shocks, to include natural disasters have affected growth across the region. The IMF executive reasoned that the Caribbean has not been able to fully insulate itself from such shocks because of large macroeconomic imbalances.

The high cost of electricity, persistent outflows of highly skilled workers, high rates of violent crimes, and limited access to financing for medium-sized enterprises have also been cited as factors inhibiting growth.

Lagarde hailed the work of Jamaica's Economic Programme Oversight Committee for its role in monitoring Jamaica's economic reform programme and building support for it.